TetriNET is a multiplayer variant of Tetris for up to six players, adding devastating power-ups to the classic puzzle game.

Unlike Tetris, TetriNET can only be played in multiplayer mode, with two to six players.  The twist in this Tetris variant is that powerful special blocks can be collected from the playing field and used to either boost your own position or hurt an opponent's.  These special blocks change the focus of the game from merely amassing Tetrises to a strategic mixture of clearing lines and hunting down powerful blocks.

Players cannot arrange the order of special blocks in their inventories - they must use the blocks they collect first.  The inventory has a maximum size of 18.  If the inventory is full, and new special blocks are collected, they are discarded.  The developers claim that allowing players to immediately access their most powerful blocks would remove strategy from the game. 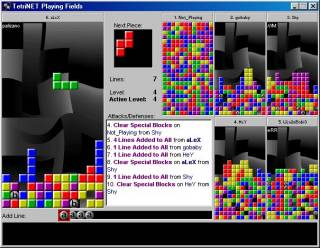