Spun-off from Aero the Acro-Bat, itself a rip-off of Sonic the Hedgehog, Zero the Kamikaze Squirrel plays hero in his own adventure to save the trees and rescue his gal, Amy.

Zero the Kamikaze Squirrel is a 2D side-scrolling platformer for the Super Nintendo and Sega Genesis. It is a spin-off of Aero the Acro-Bat, and features his recurring rival Zero in his own adventure. The game begins mid-way through Aero the Acro-Bat 2's story, explaining Zero's sudden disappearance. This game and Aero the Acro-Bat 2 were released around the same time.

Zero's home forest is being endangered by criminals who want to cut down the trees to make paper to forge money. Zero will not stand for this and has to return home to save the forest. His boss (and Aero's nemesis) Edgar Ektor reluctantly allows him to leave his service temporarily.

Zero the Kamikaze Squirrel is an action platformer. The goal is to make it to the end of the level in one piece and with as high a score as possible. Each level also has a handful of secret areas to find.

Zero has quite a few abilities that helps him defeat enemies throughout levels: 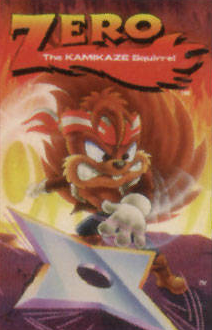