Jeff Wayne's The War of the Worlds

Jeff Wayne's The War of the Worlds is a Strategy RTS based on the classic HG Wells novel and also Jeff Wayne's musical adaptation of the story.

Jeff Wayne's War of the Worlds is a Strategy/RTS developed by Rage Games Ltd. and published by GT Interactive and was released alongside a PlayStation third person shooter game of the same name by Pixelogic Limited (the studio that also developed The Italian Job and Crime Killer). The game was based on the HG Wells classic Sci-Fi story about an attack by Martians on 19th century England (moved to somewhere around the WWI era in the game adaption) and also on the musical concept album adaptation by progressive rock musician Jeff Wayne. In Europe it was released on the 100th anniversary of H.G. Well's book, and the 20th anniversary of Jeff Wayne's album.

The game was unique in that it was one of the first non-linear strategy/RTS games ever made and an early strategy game to adopt 3D graphics. The game was single player only at release, a patch that would enable a multiplayer mode was announced but never released, but a registry modification was discovered that allowed for a rudimentary multiplayer mode in the retail version.

The game allowed players to choose to play as either the Humans or the Martians in the main campaign mode. There were no set missions, instead the player was presented with the "War Map" of England and the goal was to conquer all 30 sectors of the map. Sectors could be attacked in any order as the game was completely non-linear. The Humans controlled more of the map at the start of the game but Martian cylinders would drop into different sectors at various points, giving the Martians reinforcements and the Humans more of a challenge. There was no resource collection in War of the Worlds, instead each sector had a certain amount of the various resources (coal, iron, steel for the Humans, for example) and part of the strategy of the game was to build buildings that would capitalize on the resources of the sector. Building a building that required coal in a low coal sector would make the building extremely inefficient, for example.

Sending the player's units into a neutral sector would give their faction control of the sector while moving into an occupied sector would transition the game into the "Battle Map" where the RTS portion of the game took place, with the goal being to eliminate the forces of the opposing faction. Humans had weaker units but their cost to produce was far less than the Martians and they also were produced in greater numbers (It was possible to have hundreds of units battling in a single sector). Human units consisted of WWI era tanks, artillery and anti-aircraft guns, blimps, bulldozers and also ironclad battleships, which were extremely effective when attacking coastal Martian sectors. The Martians units were highly advanced and more powerful but were produced one at a time for a much higher cost. The main Martian unit was the Tripod walker and it's variations. The tripod was armed with a heat ray and poisonous black smoke grenades. Martians also had units like the Xeno-Telepath, which could control the minds of enemy units.

Since the game was based on not only the H.G. Wells book but also the 1978 musical adaptation, it should be no surprise that the game had a fantastic soundtrack, produced by Jeff Wayne himself. Wayne (along with the house/trance group Max Mondo) remixed and re-scored over 45 minutes of his War of the Worlds album for the games score, giving the progressive rock originals a more techno/electronica feel. 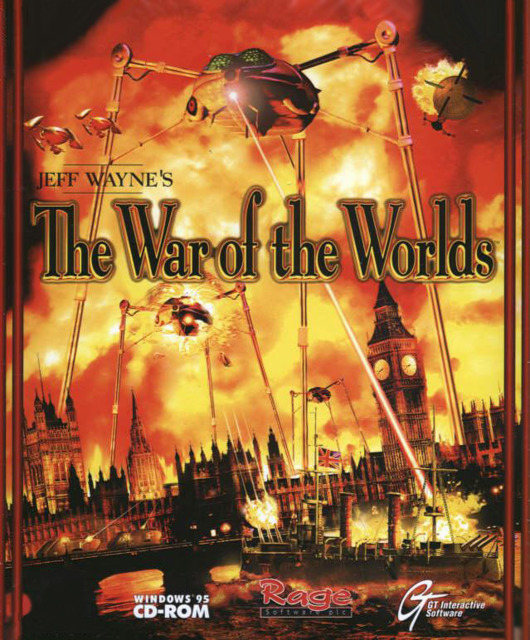