An action-adventure game loosely based off the blockbuster film of the same name.

Waterworld is an action-adventure game that was originally released on the SNES in 1995. It was developed by Ocean and went on to be released on multiple platforms such as the Virtual Boy. Although it is considered as a licensed game, it's only loosely based on the movie.

The game opens up with a series of stills from the movie with the movie's lore written on top. This is actually one of the only indications that the game has anything to do with the movie:

The temperatures climbed, the vast fields of ice at its poles melted and the oceans rose.

The only remaining pockets of civilisation are floating islands of debris called Atolls.

The player assumes the role of the Mariner, the drifter played by Kevin Costner in the movie, and fends off Smokers but that's about all the game has in common with the movie.

Note: "it's" in the first line is a spelling mistake that the developers made.

The game alternates between 3 different gameplay phases: some levels have the player piloting a boat, others have them doing some platforming and then there are the bonus stages: 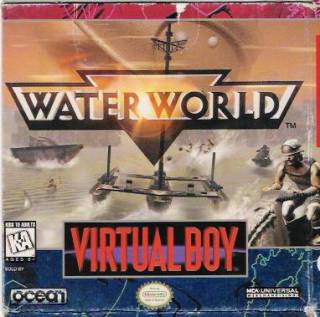