Full Spectrum Warrior is based on a game commissioned by the US Army to train light infantry troops in urban combat situations. The game places soldiers in a tense, hostile, and claustrophobic environment where they must complete a variety of military objectives.
PlayStation 2

Full Spectrum Warrior is a squad-based shooter in which the player who assumes the role of the commander issues commands to the two fireteams. Each fireteam has a team leader who is a equipped with a M4 Carbine and a GPS. The GPS is used to locate mission objectives. The Team Leader also has a radio for communication purposes. The second team member is the Automatic Rifleman, who is equipped with an M429 Squad Automatic Weapon, this is used to lay suppressive fire on the enemy. The second team member becomes leader if the team leader is dead. The third team member is the Grenadier, equipped with an M4 with an grenade launcher attachment. The fourth and last team member is the Rifleman, equipped with a M4 carbine. If a member of the team is wounded, another member of the team will carry them. Each fireteam has a limited amount of fragmentation and smoke grenades. Sometimes during the game, there will be a third asset designated as Charlie Team, ranging from anti-armor engineers to US Army Rangers.

Throughout the game, the player does not directly control any of the fireteam members; instead, orders are given using a cursor that projects onto the environment, letting the player tell his/her soldiers to hold a position and set a specific zone to cover with fire. It is also possible to order them to lay down suppressive fire on a given zone to cover the second squad's movement, or to reduce incoming fire.

Gameplay revolves around the concept of fire and movement, with one team providing suppressive fire while the other moves. The basic gameplay mechanics remain the same for the retail version of Full Spectrum Warrior, which was released on both the Xbox, Playstation 2 and the PC platforms. The retail version places much more emphasis on aesthetics; it possesses substantially improved graphics and sound.

Full Spectrum Warrior includes a co-op mode that was designed to take advantage of Microsoft's xbox live online gaming service through the use of voice communication. In co-op mode, two players are in command of their own fireteam and must work together to accomplish the goals of the level. Full Spectrum Warrior was one of the first games to utilise voice communication over Xbox Live.

A dramatic wave of terrorist attacks sweep Europe and Southeast Asia, particularly targeting US and UK interests. After months of intense searching, US intelligence has tracked the source of the attacks to the tiny nation of Zekistan.

US led operations in Iraq and Afghanistan have forced Al-Qaeda and Taliban loyalists to flee, seeking refuge in the nation of Zekistan by invitation of the nation's dictator, Mohammad Jabbour Al-Afad. His tyrannical regime houses death camps and training centers for the terrorist networks, and promotes cleansing of the ethnic Zeki population. After several failed diplomatic solutions and repeated warning by the UN, NATO votes to invade Zekistan to remove Al-Afad from power.

Pakistan grants US access through its airspace, the invasion begins. The USS Ronald Regan and USS Carl Vinson launch aircraft to airstrike Al-Afad's air, armor, and bases across the nation. When the dust settles, infantry and armor from seven different NATO nations begin to land at southern Zekistan. Under the cover of darkness, the US-led forces converge on the capital city of Zafarra.

The story starts at MOUT (if the player chooses to play the tutorial) in Fort Benning, as the squad Charlie 90 (consisting of two fireteams, Alpha and Bravo) goes through the training for each scenario. After training, Charlie 90 of the 159th Light Infantry from Fort Benning, Georgia were deployed to Zekistan as part of the NATO Invasion force sent to invade Zekistan. Charlie 90's first objective is to help secure the airfield, the main airport in the city.

After the Airport is successfully captured, Charlie 90 is tasked with infiltrating Al-Afad's palace and eliminating him. They trek through the city and make it to the palace. While they manage to capture one of Afad's top lieutenants, Afad escapes. The members of Charlie 90 also witness one of the Joint STARS planes crashing into the city. The squad is then ordered to rescue the crew of the downed plane before they can be captured by Afad's men.

Charlie 90 secures the crash site, but the crew of the plane is taken hostage by Afad's men. Charlie 90, with the assistance of two Ranger snipers, finds and rescues the crew. Charlie 90 then track Afad down and find his SUV in an old train yard. Charlie 90 must then call in an airstrike on the SUV before it escapes. If the player orders the strike in time, U.S. gunships swoop down and destroy the SUV, eliminating Al-Afad.

Despite the death of Al-Afad, propaganda broadcasts were made by a surviving group of Al-Afad soldiers called the Black Brigade, headed by one of Al-Afad's sons. As a way of repaying the Army Rangers from Mike 25 a debt for saving them in a parking lot, both Alpha and Bravo team from Charlie 90 were "on loan" to them to participate in unofficial assignments. In the first mission, both teams were to mark a radio tower for an airstrike to end the propaganda broadcasts. On the second epilogue mission, both fireteams, with assistance from Staff Sergeant Hackett, were sent to a mosque to take out the Black Brigade. The elder of two sons was killed by an airstrike during a firefight, while the younger, who was presumed to be dead assumes the role as ruler, willing to work towards democracy and stray away from his father and brother's tyrannical regime. 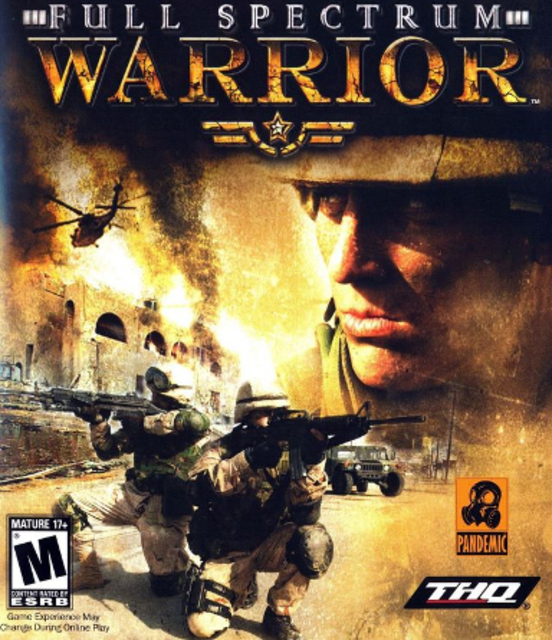