The existing franchise mode is expanded with the inclusion of Owner’s Mode. The new mode gives complete organizational control to the player. The end goal is to accumulate the highest possible net worth over the course of 30 years. Clubs start off with a meager stadium with little fanfare. Players then can build onto that stadium, set ticket and concession prices, run promotional giveaways, and hire/fire staff to build a successful team.

A system implemented to give batters slight hints before each pitch, Hitter’s Eye changes the color of the ball before the ball leaves the pitcher's hand. Each weapon in a pitcher’s arsenal has a corresponding color assigned to it. The color change will last for only a short time, varying upon a pitcher’s delivery. More deceptive deliveries that hide the ball from the batter’s view will only change color for an extremely short time; other, less deceiving deliveries will give the hitter a longer glimpse of the pitch.

Batting and Pitching mini-games offer players a chance to hone their baseball skills. The Batting mini-game is very similar to a round of batting practice. However, the hitting takes place on a field with ramps, tractors, cars, and hazards. As in the Home Run Showdown mode, players build up points based off the distance of their hits. On top of their distance, extra points can be earned by aiming hits towards indicted parts of the field and, sometimes, hitting ground balls or fly balls. Certain items placed on the field give bonus points when hit, as well. Players progress through ten pitch rounds, each with a point total to attain, until they fall short. Foul balls do not count for any points.

The Pitching mini-game is very similar to the popular puzzle game Bejeweled. The view is that of the catcher’s with the strike zone divided a number of colored rectangles. The number of pitches available to the pitcher decides the number of colors. Points are gained by throwing the correct color pitch at the correct color rectangle. Larger groups of rectangles result in more points. Progression once again comes from hitting predetermined point totals for each round. The timed variety of the mini-game puts players on the clock while the untimed mode gives players a set number of pitches.

MVP 2005 features the official minor league affiliates of all 30 Major League teams from SIngle-A to Triple-A. Though much of the players on these rosters are made up because of union restrictions, there are many notable top prospects who are conveniently labelled Top 100 Prospects on their player profile. In addition to a full schedule (which is roughly a month shorter than the MLB season), each minor league level has its own playoff system. The shorter minor league season allows players to reward well-performing minor league players with a September call-up similar to MLB's September call-up, with the only exception being that the 25-man roster isn't expanded as it is in real life. The September call-up is useful in that it can help add depth to the Major League club for a potential September playoff push and can give a glimpse of a player's skill at the Major League level. A September call-up who performs exceptionally can often win a playoff roster spot over a player who had been on the Major League roster the entire season, usually due to poor performance down the stretch which the club believes might hurt their chances in going deep into the playoffs.

Batting in MVP Baseball 2005 revolves around timing, the analog stick, and pitch location. There is no on-screen interface save a faint outline of the strike zone. Perfectly timed swings will send balls up the middle, with slightly early swings causing balls to be pulled and slightly late swings resulting in balls going to the opposite field. The direction in which the analog stick is pushed will cause hits to have the propensity towards certain trajectories. Push up for fly balls, down for ground balls, left for left field hits, right for right field hits, and so forth. Different pitch locations can have the same effect. All these factors combine to determine where balls will be hit and how hard they’ll be hit there.

The mechanism for pitching in MVP 2005 is a swing meter very similar to those that have appeared in golf games. After choosing the pitch to throw and where to throw it, the button for that pitch is held down to fill up the meter. The more the meter fills up, the more effective the pitch becomes. Fastballs pick up velocity and curveballs break harder, etc. Once the meter fills up, a marker moves back across it towards a zone used to determine accuracy. If the marker is stopped within the zone, the pitch is thrown in the previously chosen location. If the player misses the zone, a meat pitch or a ball out of the strike zone will be thrown.

There are four available fielding control schemes available in MVP 2005: automatic, assisted, manual, and MVP. Automatic takes almost all control away from the player, leaving only throwing to be done manually. Assisted points fielders in the right direction following hits, transferring control over to the player shortly afterwards. Manual and MVP give complete control to the player from the moment the ball is hit. The right analog stick is also used to initiate leaps, dives, and slides in the field. Throwing is done using a simplified version of the meter used for pitching.

The game uses a picture-in-picture setup for baserunning. Each of the bases has a diamond in upper left-hand corner representing it. If a runner is on base, he’ll show up in the corresponding window. In terms of slides, MVP 2005 handles that with the right analog stick. The stick is pushed up to go in headlong and down for feet-first slides. The runner can also go into the left or right side of the bag by the player pushing the stick to either side.

The PSP version is simply called MVP Baseball. Its a stripped down port of MVP 2005. The port does not feature online play or a full franchise mode. It does feature ad-hoc play and a single season mode. 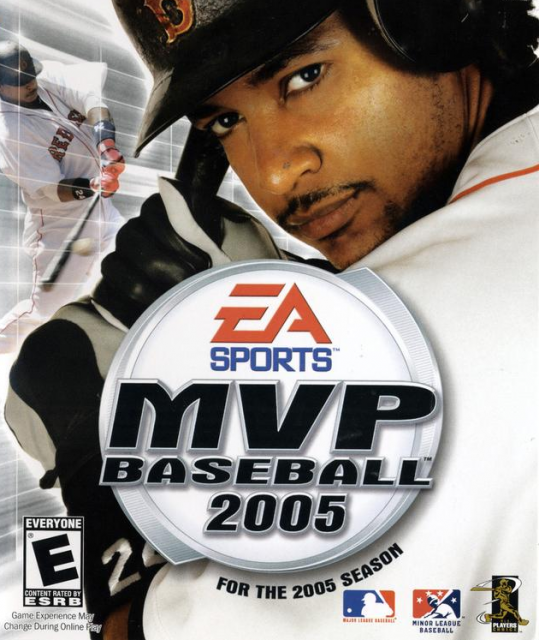