Pick up your trusty club and get ready to crush some Neolithic skulls in this historically based Real time strategy game focusing on the early Stone Age through till the late Iron Age.

Age of empires is a classical style real time strategy (RTS) game developed by Ensemble Studios and released in 1997. This is the first game in the popular Age of empires series and is one of the first historically based RTS games and has a heavy focus on resource gathering and Base creation.

Sheets of ice up to three miles high covered much of the earth’s northern hemisphere during the last Ice age. Our human ancestors persevered in the harsh Ice Age environment by developing new technologies and survival strategies at unprecedented rates. When climate changes melted and removed the ice around 12,000 years ago, humans were uniquely suited to take advantage of the new worlds that were beckoning.

During the next 5,000 years humans expanded to become the dominant species on earth. Human populations exploded because of new technologies for hunting and food gathering put all other species at a disadvantage. Within 3,000 more years, humans had established the first great civilizations on earth.

In Age of Empires your goal is to build your tribe into a mighty civilization that can fight for world dominance. You begin the game in the Stone Age with a small tribe of villagers. You most locate and extract resources such as food, wood, stone and gold. These resources let you construct building and train units to either further your economy of to protect your civilization from attack. As you advance through the Ages your building will improve and more skilled and elite units and structures will become available to you. There are four stages to development. The Stone Age, the Tool Age, the Bronze Age and finally the Iron Age. At each Age structures will change in appearance to reflect the historical period.

As well as campaign modes, the game includes two other game types. Random map and the so called “death match” in which all players start at Iron age and have very high resources. There are multiple ways to win these game types. Such as military conquest (killing all other civilizations on the map), Building a wonder ( a unique building for each civilization that costs large amounts of resources) or by achieving the highest score.

There are 12 different playable civilizations in Age of Empires each with their own benefits and specialities.

Age of empire has a unique sounding soundtrack created by David & Stephen Rippy who wished to create a sound that reflected the time period of the game. 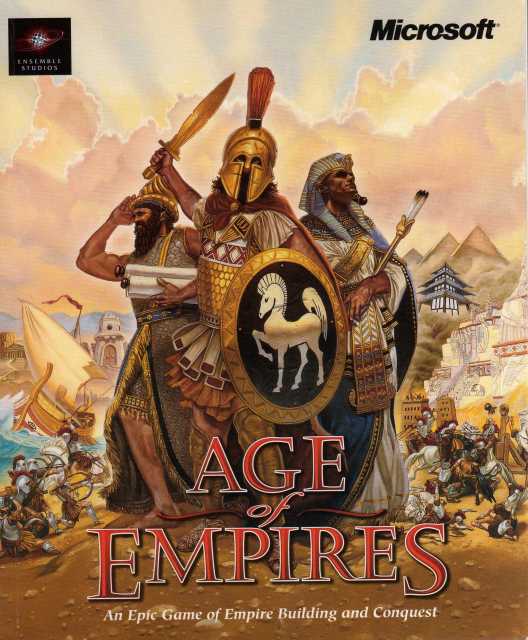