Mickey Mouse and the gang play some Tetris in Capcom's official Disney adaptation of the popular puzzle game series.

Magical Tetris Challenge (known in Japan as Magical Tetris Challenge featuring Mickey) is a tile-based puzzle game developed and published by Capcom for the Nintendo 64 in Japan (on November 20, 1998), North America (on January 14, 1999), and Europe (by Activision on September 1999). It was also released for arcades (using N64-based SETA Aleck 64 hardware) exclusively in Japan in 1998 and was ported to the Sony PlayStation in both Japan (on March 18, 1999) and Europe (by Activision in 1999).

An official game in the Tetris series of puzzle games, Magical Tetris Challenge features the use of Disney characters (particularly those from the Mickey Mouse universe) and includes a unique "Magical Tetris" versus game mode (featuring the use of unusual-shaped tetrominoes as a way to attack opponents).

The game later received a handheld port for the Game Boy Color in Japan (on November 12, 1999, re-titled to Tetris Adventure: Susume Mickey to Nakamatachi), North America (on February 17, 2000), and Europe (on March 24, 2000). This version features a reworked Story Mode (now known as "Quest Mode") and new game modes. 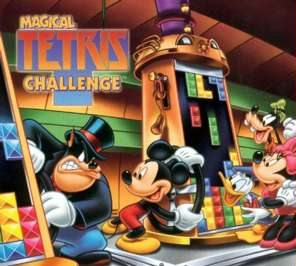