Flashback: The Quest for Identity

It's 2142 and the player is Conrad B. Hart, an agent for the Galaxia Bureau of Investigation. He must recover his lost memories to save Earth before it's too late.

Flashback: The Quest for Identity is a 2D action-adventure platform game originally developed by Delphine Software International and published by U.S. Gold for Commodore Amiga home computers in 1992. The game stars plucky protagonist Conrad B. Hart, a young man stricken with total amnesia who finds himself stranded deep in the jungles of an alien world. Similar to Delphine's earlier title Out of This World, Flashback is notable for its use of rotoscoped animation, allowing for a visually fluid representation of the characters' various movements.

The game was first released on floppy diskette for the Amiga, a home computer popular in Delphine's native France; it was eventually ported to MS-DOS, SNES, Genesis, Atari Jaguar and the Acorn Archimedes the following year. A CD-ROM version was later released for MS-DOS, Sega CD, CD-i, 3DO and FM Towns in 1994. Many of Flashback's ports were developed wholly or in part by Tiertex Design Studios.

Flashback: The Quest for Identity was followed by its 1995 sequel Fade to Black. The original game was remade in 2013 with full 3D graphics and was released simply as Flashback with no subtitle.

The game opens in medias res as protagonist Conrad B. Hart flees down a corridor from a pair of men armed with laser weapons. Conrad jumps onto a hoverbike and temporarily evades his assailants; however, a much larger transport soon gives chase and quickly blasts Conrad's vehicle out of the sky. After a brief search of the crash area, the armed transport flies off, leaving Conrad for dead in the depths of an unknown jungle.

Conrad awakens the next day in an alien jungle on a planet known as Titan. It becomes apparent he has no memory of events prior to the chase. Upon awakening he notices that he knocked a cube-shaped object off a ledge and sets out to retrieve it. The cube contains a message recorded by the protagonist before he lost his memory. He gives no clues as to what has happened but tells him to seek out his friend Ian who is located in New Washington. Conrad then proceeds to take on the dangers of this jungle to find Ian. After battling enemies in the form of robots and mutants with other obstacles such as turrets and strange fires Conrad eventually comes across a hole in the ground that acts as an entrance to New Washington. An old man who sits near this hole trades an Anti-G Belt that negates the effects of gravity to some extent, for some credits allowing Conrad access to his next location.

A short while after arriving in New Washington Conrad discovers Ian being held by a couple of New Washington Police Officers. After battling these men off Ian places Conrad in a machine that recovers his memories. It is revealed that Conrad had discovered a race of aliens was blending in with the human population on Earth in large quantity implying an eventual take over of the planet. His revelation had caught the attention of this alien race who would try to assassinate him. After they failed the first time it prompted Conrad to record the Holo-Cube message found earlier in the game and to send a copy of his memories to Ian. The game's manual would also explain that the alien race is called Morphs and killed Conrad's girlfriend. One night the aliens finally captured Conrad and took him aboard their ship. On this night they erased his memory but failed to secure him as Conrad would awaken and flee his captures, leading to what was witnessed at the beginning of the game.

With his memories restored Conrad decides he needs to return to Earth. With little money however, this was never going to be as easy as it sounds. Ian suggests that Conrad should take part in a TV Show where he must fight Cyborgs for a chance to win a ticket to Earth. As it would be too dangerous to compete under his own name Conrad has to get false ID papers. Ian sends him to a contact named Jack, who demands 1,500 credits for the papers. Since he doesn't have that sort of cash on hand Conrad partakes in multiple odd jobs available in New Washington.

First he is hired by Titan Spaces Lines for an apparently easy job of collecting and delivering a parcel. Just outsides the parcels destination he is attacked by a member of the NWPD but overcomes him and delivers the package.

The second mission comes from Virtual Crop that requests Conrad escort a VIP to their research center. It is made clear that the mission will require a firearm ad the area traveled in will be dangerous. The warning is well advised since mutants infest the area in addition to malfunctioning Security Spheres. Like previously though Conrad succeeds.

Titan TV hires Conrad for the third mission. They report that a Model Cy-Borg 2.1 has escaped with the possible assistance of an outsider. It carries a virus which could spread to all other functioning cyborgs. A police officer informs Conrad that the Cy-Borg wants to make a deal. This turns out to be a trap however and Conrad kills the Police Officer for access to 2.1’s lair. Once in his hideout Conrad eliminates 2.1.

With only one mission required to gain the necessary credits for the false papers, another party hires Conrad to eliminate the mutant threat that is lurking in all the Restricted Areas. After accomplishing this task Conrad meets Jack one more time who now hands over the papers allowing entry into the game show.

The game show of requires participants to fight their way through eight different levels of deadly situations. Littered throughout every level are Cy-Borg 2.1s, Sentry Spheres and mines. Conrad manages to fight through all levels and win a ticket to Earth.

Conrad believes The Morphs have a hidden base within a night club on Earth but upon arrival is attacked by the local law enforcement and security measures. After some time he locates the nightclub. He breaks in through an upper level thus causing more security measures to become active making his job of finding the Morphs more complicated.

After much tribulation Conrad finds himself in a vent shaft above a group of Morphs that are discussing their plans. They reveal that soon their invasion will begin since millions of their kind are ready to teleport in and destroy humanity. Conrad’s vent then proceeds to collapse under his weight and he is discovered. It is decided that he will be thrown into the dungeon with plans for interrogation.

After he wakes up in his cell Conrad discovers he is unarmed and that Cy-Borgs have been sent to his cell to carry out the interrogation. Unexpectedly though Conrad makes a quick burst for the door and evades the Cy-Borgs. Luckily enough his gun was not too far away and he is able to destroy his would-be interrogators. Further into their lair Conrad finally confronts the Morphs in combat. With their ability to take and lose shape whenever they want Conrad has a difficult time but overcomes everyone he meets. With the realization that the Morph invasion is close with no time to report it, Conrad teleports to the Morph home planet with the intention of stopping their conquest.

On the planet Conrad tries to assist a human prisoner who is in possession of explosives. Unfortunately the man is killed by a Morph upon his release but lives long enough to give Conrad the destructive device. Conrad discovers a diary on the planet that reveals a captive human scientist managed to enter the theory of molecular research into a Titan computer. This theory was taken up by Conrad who made glasses revealing the aliens living among the human population. It is also revealed that The Master Brain, positions at the center of the planet, controls all morphs, destroying him will end the race. The device Conrad holds was created by the scientist and is powerful enough to destroy the entire planet.

With other options being non-existent, Conrad decides to put the scientist's plan into action. He travels all the way into the planet’s core. After battling more Morphs the Master Brain is killed. After dropping the Atomic Charge into the foundations of the planet Conrad races against time to escape the planet in a docked ship before the planet explodes.

Conrad only just makes it, with the ship just out of reach from the destructive force of the Atomic Device. Conrad soon learns though that he is in a galaxy unrecognized by the ship’s systems. With the possibility of being lost in space forever Conrad places himself in cryogenic suspension to be awakened if he is ever discovered.

When the Genesis version was released Electronic Gaming Monthly issued the scores of 9,9,9,8 in addition to the Editor's Choice Gold award. They added, "...one of the best games ever made for the Genesis. The action is non-stop, and it really feels like you're playing a movie!...get a joystick, because the generic Sega controllers aren't precise enough to handle the diagonal motions necessary for some of the specialized techniques". 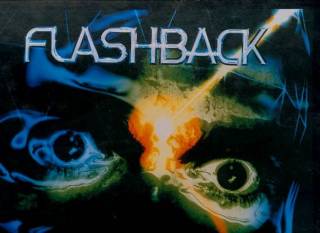