Other than some shared location names, including the titular town of Silent Hill, Silent Hill 2's story is entirely new and self-contained.

Often the game is classified as survival horror - the player has limited resources at their disposal and has to conserve resources in order to survive; mainly ammunition and medical supplies.

The first street the player comes onto is the corner of Lindsey Street and Sanders Street. As with the first game, certain streets are blocked and it is up to trial and error from the player in order to find their way through their maze-like surroundings, hampered by the fog.

A widower and the game's main protagonist. James is introduced as a good-natured and kind man, though early on there are hints of his aloofness. He was working as a clerk when his wife died of a mysterious illness. It's later revealed that he euthanized his wife to end her suffering, and that it may not have been entirely out of compassion. The guilt of this act, which he has managed to block out, is what draws him to Silent Hill.

James' deceased wife, who died before the events of the game. Nevertheless, she has managed to contact James with a letter and told him to meet her at Silent Hill. Despite the impossibility, James follows the letter's advice to Silent Hill to start looking for her. Mary was considered a compassionate yet reserved woman by those who knew her. Depending on James' choices throughout the game, either she or her doppelganger Maria fights a remorseful James for the game's final boss battle.

The first person James meets on his journey. Angela is first seen in a graveyard looking for her father. James meets her in various locations in Silent Hill. At one point she gives James a bloodied knife which the player cannot use as a weapon. It is later inferred that Angela was sexually abused by her father and she killed him in self-defense. Like James, she was summoned to Silent Hill because of her guilt.

James first meets Eddie in the apartment complex while he is in the bathroom vomiting, with a dead man stuffed in the refrigerator in the kitchen nearby. Eddie resembles James except that Eddie is much larger and tends to be aggressive and simple-minded in his responses. Eddie later reveals to James that he did kill the man in the apartment, as well as some of the other dead people James finds him with later. He kills those who make fun of him. Eddie attempts to kill James after he misinterprets a comment. As Eddie is dying he tells James that they aren't so different, and that "they're not like other people". He was summoned to Silent Hill after shooting a man and a dog, again spurred by guilt - though in this case it's implied that he feels more guilty about the innocent dog than the man.

James first run into Maria at Toluca Lake. She looks exactly like James's wife Mary "apart from the hair and clothes". Maria follows James on his search and they are often separated. Maria also is killed by Pyramid Head on a few occasions but always returns later with no memory of what happened. In truth, Maria is a seductive physical manifestation of James's wife that he created in his mind. The town of Silent Hill forces James to watch her die over and over again to punish him for his guilt.

Laura is an eight-year-old orphan that seems to be oblivious to the horrors of the town around her, and likewise is not affected by its changes to a nightmare landscape. She meets James outside of Rosewater Park and tells him that she knows his wife Mary and has a letter from her. Laura knows Mary from the Hospital where the two of them were staying and has a letter confirming this. Due to a bad first impression, Laura has trouble trusting James and frequently runs away when she encounters him.

Ernest Baldwin did not appear in the original Silent Hill 2 for the PS2, but was a character in the "Born From A Wish" mission on the Xbox version of Silent Hill 2 called Silent Hill 2: Restless Dreams. All the extras in Restless Dreams were later released on the PS2 in the greatest hits version of Silent Hill 2. In the Born From A Wish scenario the main playable character is Maria, who wakes up in the bar she works in. Maria can hear Ernest on the other side of a door inside his mansion. Ernest tells Maria that he has lost his daughter, Amy, and asks if Maria will help him retrieve a few things. These things are in fact the items the cult used in a ritual to revive the dead. When Maria opens the door in the Mansion there is no one on the other side, implying that Ernest was a ghost.

Pyramid Head is seen throughout Silent Hill. A hulking figure with a giant knife and a red pyramid-like helmet on his head. Pyramid Head not only kills people but also kills the monsters of Silent Hill. In the time of the cult in Silent Hill, Pyramid Head was the cult's executioner. James' subconscious has used that image to create his own personal executioner because James wants to be punished for what he has done.

James Sunderland receives a letter from his wife, Mary, asking him to meet in Silent Hill, at their "special place". The only problem with this is that James's wife has been dead for three years, the victim of a mysterious illness. James feels as if he has been summoned to Silent Hill and returns to the fog shrouded town. Throughout his search James runs into a few other people the have been called to Silent Hill and all the while he is being stalked by a menacing creature dubbed Pyramid Head. As James travels through Silent Hill looking for his wife and their "special place" he gains insight on the town, as well as his own dark and terrible past.

Continuing the tradition started in the first game Silent Hill 2 features multiple endings. Different endings are given depending on different criteria throughout the game such as, how long James ran, how many health items he used, conversations listened to or items looked at or collected.

James leaves Silent Hill with Maria. Before they leave, Maria coughs and James say "We better do something about that cough" echoing Mary's death.

This is considered to be the true ending to Silent Hill 2. James is seen picking Mary up and carrying her out of the room. The player can then hear a car door shutting and the car starting. James says "Now we can be together" and James drives his car into the lake killing himself. The credits are accompanied by the specific track of "Angel's Thanatos", Thanatos being the Greek mythological representation of death.

James leaves Silent Hill with Laura fulfilling Mary's wish to adopt her. The track played over the credits for this ending is "Overdose Illusion".

James collects the items needed to perform the ritual of rebirth. He is seen rowing out to a small island on Toluca Lake with his wife Mary dead in the boat. According to speculation, James was attempting to use the Ritual of Rebirth to bring back the cult god Samael and resurrect his wife. The track played over the credits is "The Reverse Will".

After using the Channeling Stone in the correct locations, space aliens come and abduct James. The whole ending is played in black and white. James meets Harry Mason from the first Silent Hill game and asks him if he has seen his wife -- to which Harry asks James if he has seen a little girl around.

James enters a room and finds a small dog at a control panel that appears to control every aspect of Silent Hill. The scene is spoken in Japanese. James falls to his knees and says "It was you!" The dog was behind everything. The dog licks his face and the credits roll with some very interesting music.

The Xbox version has the honor of being one of the first games in the library of Microsoft's first video game console, releasing just barely one month after the console launched. Not only that, but the Xbox version has exclusive content not available in the PS2 version. Xbox owners got to play a shorter side-campaign called "Born From a Wish" which allows the player to play a sub-story as Maria that focuses on events right before she meets James Sunderland in the main story. "Born From a Wish" became available to PS2 owners on the PS2 Greatest Hits version of the game that was released in November 2002. Silent Hill 2 was also certified as a Xbox Platinum Hit in February 2003.

The original soundtrack was composed by Akira Yamaoka. 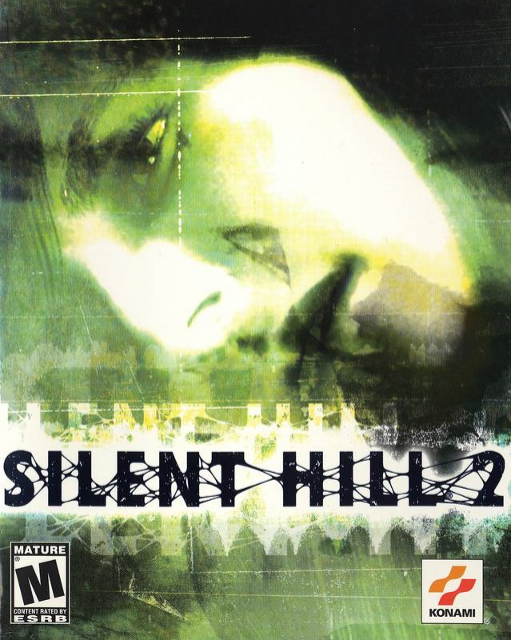