Dugeons can also be explored. Dungeons are homes to many of the monsters. It is wise to be prepared for battle in these places because some monsters will attack the player upon site. Not all monsters do however, some will wonder, and some will cower from you. Also in dungeons the player can find treasure, including money, swords, and shields. The player is able to sell collected items for money and also buy new weapons.

When a battle starts the player is faced with choosing one of two cards. There is a Sword Card, which who ever gets this card will attack first, and the Shield Card is for the player that will defend first. After that the battle is conducted in a Rock-Paper-Scissors, like manner. Also included is a sword and shiled card depending what you have. A normal attack is represented by the sword icon.

When the player attacks the enemy the sword deals a certain amount of damage. The amount of damage can be lowered if the opposing enemy uses the shiled ability. Once again the rest of the battle and attacks are designated by a rock-paper-scissors style.

Defense is the worse option to pick in Dokapon. Most monsters choose to use their rook, paper, scissors moves and deal a great deal of damage even with defense. Swords do slighly less, but monster rarely use this option/ 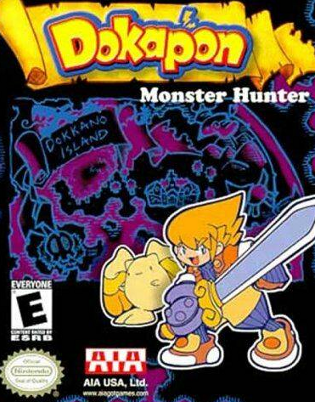