Geometry Wars: Retro Evolved breaks out into its own game with an Xbox Live Arcade release that rejuvenated the dual-joystick shooter genre.
Xbox 360 Games Store

Geometry Wars was initially created as a minigame for Project Gotham Racing 2. It broke out on its own in 2005 with an updated version for the Xbox 360's Xbox Live Arcade. The game was initially available there for $5, and it quickly became one of the most-downloaded games on the service. Since the 360 release, the game has appeared on the PC and mobile phones. The game itself is an updated take on the dual-joystick shooter formula popularized by games like Robotron: 2084 and Smash TV. Graphically, the game goes for a deliberately classic-looking vector style. And while all entities are made up of simple geometric shapes, the heavy use of contrasting colors and bright flashes when a foe is destroyed gives the game visual flair. Similarly, certain power ups or enemies will cause distortions on the playing field itself that affect most units caught in the bends and folds created. These effects culminate to create a defining mixture of retro and modern visuals that Geometry Wars has become known for.

Geometry Wars plays much like classic dual-joystick shooters: Players must dodge and weave between foes while simultaneously destroying as many as possible for as long as possible. Players receive a weapon upgrade every 10,000 points, but will lose it if they die. Every 75,000 points, players gain an extra life and every 100,000 points, players gain an extra bomb. Bombs are used to clear the entire grid, destroying all enemies with a large shockwave that causes the grid to ripple. In Evolved, your lives and bombs max out at 9, but in retro you can get an unlimited amount of each, making the retro leaderboards plagued with massively high scores that take days of playing to reach.

The longer a player goes without dying, the higher their multiplier increases, increasing the points they get for each kill. As time goes on, players are confronted by more and different enemies, that appear at random, usually from the corners of the grid. At first small numbers come, but eventually massive swarms of enemies will begin spawning simultaneously from all sides, requiring split second reactions and precision movements to stay alive. When a player dies, all enemies on the grid are destroyed and the player gets a momentary pause before the waves of enemies resume.

The leaderboards are a very integral part of Geometry Wars: Retro Evolved, with a tight-knit community of fans who are always competing against each other to top their scores.

While there isn’t a set level to choose from when playing Geometry Wars, the game will steadily ramp up in difficulty depending on how frequently (or infrequently) you die and how often you use bombs.

The changes in difficulty are notable by observing how the different types of enemy spawns increase in size and frequency the more you play. The images below are the base level spawns and what enemies make up that specific spawn.

Continuous Spawn – These come from the corners of the map and only apply the green, blue and pink diamonds and the small blue triangles. Their levels are attributed by how fast they spawn in enemies and how many seconds they last, increasing in spawn frequency and enemies as the game progresses.

The longer the player survives the more severe the spawns will become. Below are examples of each of the above spawns as they increase in difficulty in severity.

Below are images showing the increasing levels for these types of spawns. 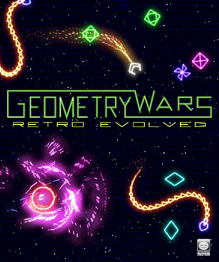