Created by the twisted minds at Shiny Entertainment (led by Dave Perry and Doug TenNapel), Earthworm Jim is a nonsensical side-scrolling platform game that allows the player to venture through the galaxy as an earthworm trapped in a futuristic space-suit to rescue Princess What's-Her-Name.

Earthworm Jim is a side-scroller shooter from Shiny Entertainment and the first game in their Earthworm Jim series. The player assumes the role of the eponymous annelid who is able to shoot in multiple directions with his space blaster, with the ultimate goal of saving the galaxy from Queen Slug-for-a-Butt. The game is best known for its surreal sense of humor and fluid animations.

Earthworm Jim premiered in the October of 1994 for multiple platforms. It saw a sequel the subsequent year: Earthworm Jim 2. In 2010, Earthworm Jim received HD rereleases for modern consoles.

Jim was just an ordinary earthworm who, early one morning, was running from some crows when an indestructible, high-tech super suit (created by the evil genius Professor Monkey-for-a-Head) fell onto him from the sky and, by some wonderful coincidence, the opening of the suit landed on him, and in he went, transforming him into the amazing annelid we've all come to love. Then he took out his gun and exploded the crows who had been chasing him.

The suit had been dropped by a space ship that was being attacked by Psy-Crow, an evil henchman for the Evil Queen Pulsating, Bloated, Festering, Sweaty, Pus-Filled, Malformed Slug-for-a-Butt (or Queen Slug-for-a-Butt in short). The suit was originally designed for her to help her take over the galaxy (...though she probably could never fit in it). Psy-Crow comes to earth to look for the suit but only finds the scorch marks made by the impact of the suit and the exploded crows. He radios Queen Slug-for-a-Butt and they talk about their evil plans for her sister, Princess What's-Her-Name (this game likes its hyphens). Unbeknownst to Psy-Crow, Earthworm Jim was hiding and heard everything. Mustering up some new-found courage, Jim decides to embark on a quest to rescue the beautiful princess.

Jim begins his quest to rescue Princess What's-Her-Name in the game's first level, "New Junk City". There, Jim is introduced to concepts that will be seen throughout most of the course of the game. This includes the use of chains, rope, moss, etc. to climb horizontally, attempting to avoid the peril of landing on spikes, and swinging from hook to hook via Jim's head (using his worminess as a whip). Each level has its own unique gameplay elements to cope with as well. This level in particular includes obstacles such as bouncy piles of tires and zip-lines the player has to use to get Jim to his destination.

Jim will almost immediately encounter baddies at the start of the game. His weapons include a little red blaster and his own earthworm body. Either weapon can be used almost at any time, though on occasion one can be more effective than the other (the gun can stun a crow, but it takes a little longer to kill than by just using the whip, which only takes a single lash. However, the crow must be at the right distance or it's ineffective). Jim's blaster has a full automatic fire rate although it's ammo is capped at 5000. Additional ammo can be picked up throughout the level (the little blaster symbols floating around). Should Jim run out of ammo, the blaster will recharge up to one hundred bullets by itself. There are also Mega Blaster bullets that can be found in a few places in every level. Each Mega Blaster upgrade is good for one shot, delivering a large, devastating beam that destroys any lower enemy with one touch.

Though a platforming game at heart, each level has its own special twists to the formula, breaking up the run-and-gun-and-jump model to deliver on such things as riding hamsters or bungee jumping.

Jim starts off his adventure in this junk yard which he must get through to defeat both Billy the Bin and New Junk City's owner, Chuck.

Jim jumps on his Pocket Rocket and races with Psy-Crow to the end of the level, avoiding asteroids along the way.

A level that the player only has to complete if Jim loses against Psy-Crow in the Andy Asteroids? level, Jim must have a one on one battle with the mad crow himself to continue.

Planet heck is a strange hell-type planet. This is where Evil the Cat lives and where the player must defeat the likes of lawyers and an un-meltable snowman. The player must complete the level while listening to horrifying elevator music.

Down the Tubes is an underwater level in which Jim must ride giant hamsters, knock over Bob the Killer GoldFish and complete the infamous tube race.

Major Mucus is out to get Jim! Compete with him in a 3 round battle in which Jim and him both bungee jump down to infested waters and fight by swinging into each other and seeing which cord breaks first.

The 5th level takes place in Professor Monkey for a head's lab. Watch out though, Jim may just lose his suit, make sure to get it back.

Who Turned Out The Lights?

A hidden area found in Level 5 which is completely blacked out besides spotlights, the enemies' eyes and doors.

Jim has to escort a cute, tiny puppy named Peter through a level that consists of holes, tentacles and meteor showers. Peter is a small cute timid little dog, but when very frightened he becomes a raging monstrous Hulkish beast.

The level takes place in the intestines of a strange creature and at the end of the tunnel Jim must face off against Doc Duodenum. The level is missing from the SNES and PC versions of the game.

It's all come down to this, Jim is nearing the end of his journey! At the end of stage, prepare to face off against the appropriately named The Evil Queen Pulsating, Bloated, Festering, Sweaty, Stinky, Pus-filled, Malformed, Slug-for-a-Butt.

The XBLA version has 2 avatar awards to be earned.

Earthworm Jim has an awesome soundtrack which consists of - 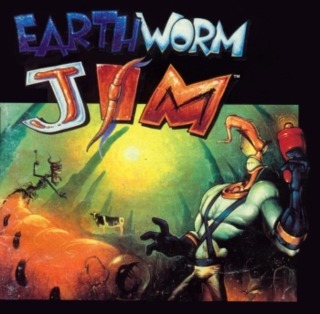