Eye of the Beholder

The first entry in SSI's Legend Series based on 2nd Edition AD&D license. The Lords of the City of Waterdeep have put out a call for heroes to investigate the evil lurking in the sewers beneath their streets.

Eye of the Beholder (EotB) is the first game in the AD&D-based Eye of the Beholder trilogy published by SSI as a part of their "Legend Series." It was developed by Westwood Associates, the same developers that would go on to become Westwood Studios, and published by SSI. It was notable at the time for its use of lush 3D graphics, extensive puzzles, and animated monster encounters along with the degree of interactivity that players had within its dungeons such as flipping levers, weighing down pressure plates with stones, and its real-time interface. The game pits a party of adventurers against the machinations of a beholder known as Xanathar: a ruthless criminal hiding deep beneath the port city of Waterdeep.

The game is a licensed TSR product, and implements the 2nd Edition AD&D ruleset and features the Forgotten Realms campaign setting that had been used in previous SSI AD&D games such as the Gold Box series. In the Forgotten Realms setting, Waterdeep is one of the greatest cities of the era, the so-called "Crown of the North," a vital trading hub whose wealth has seen its environs and its influence expand rapidly throughout the Sword Coast region. The secretive Lords of Waterdeep, the unseen council that both watches and protects the city from fell schemes discovered outside and within its own walls, maintain the tenuous balance of power between the factions there in order to ensure its survival. Only one of these Lords is ever shown as the "public" face in order to act as a liaison between the people and themselves.

Copy protection takes the form of challenge questions that the player will occasionally be asked during the course of the game that would refer to a specific word within the game manual. Copies were encouraged in order to preserve the original disks. The console versions did not include this aspect.

The manual is also notable for including a great deal of information concerning the monsters, classes, and weapons that could be encountered within the game, all adhering to the 2nd Edition AD&D ruleset. Experience tables and other pieces of information are located in the back of the manual. The following manuals would be similar in design, although the monsters described would be changed from one title to the next. The manual for Eye of the Beholder also contains a rough map of Waterdeep as well as a historical primer on its significance.

The game was ported to consoles in 1994, including a SNES version by Capcom and a Sega CD version by Sega. While Capcom's version is a more faithful reproduction of the original, the Sega CD version was an enhanced remake famous for its CD soundtrack composed by Yuzo Koshiro. Departing from the chiptune medieval music of the the original PC version, Koshiro's Sega CD soundtrack was one of the first ambient electronica soundtracks.

Eye of the Beholder's story begins with a meeting called by Piergeiron, the current Lord of Waterdeep, with the party. He hands them a letter describing a threat that his friend, the Archmage, Khelben "Blackstaff" Arunsun, has detected witin the city and requests that the party investigate the disturbances and, if necessary, deal with them in whatever method they see fit. They are given an official commission from the city and are quickly ushered to the sewers where they believe the threat to be located. However, their unseen nemesis has been waiting for them and the only way out is suddenly blocked by a thundering avalanche of rocks and stone, forcing the player to delve deeper below the streets of Waterdeep and to a confrontation with their foe.

After a series of traps and challenges that the party encounters during the adventure, they come face to face with Xanathar, a beholder who is also acting as the major crime lord of Waterdeep who has been plotting his ascension to power. After a climactic battle in which Xanatar is defeated, the party is celebrated as heroes of the city.

The game uses a grid-based, 3D system wherein the world is viewed from a first-person perspective with 90° turns and movement spaces. Within the ever-present interface, a small window on the upper left quadrant of the screen displayed the world as in the first with the party listed on the right. A text box on the bottom part of the screen displays various messages while a compass is also shown when outside of combat. Random enemy encounters provide combat opportunities within the game against mixed groups of foes. Everything in the interface is mouse-driven.

Party setup and character selection are left entirely up to the player and many of the mechanisms and options available would remain unchanged through the next two iterations of the series. The party would always remain limited to six characters.

Six races are available for players to choose from and would be the first step in creating a new batch of characters. Gender has no bearing on a character's performance aside from making available the appropriate portraits during character creation. Many of the steps utilized in this part of the game would continue to act as the standard setup throughout the series.

In keeping with the 2nd Edition AD&D ruleset, each race has its own set of restrictions concerning both what classes are available to them such as how far they can advance in certain ones. Racial modifiers can also affect their efficiency in certain professions.

As with many RPGs, the game offers a choice to the player to select from a variety of classes that they could use to first create their characters and, ultimately, their parties with.

Throughout the entire Eye of the Beholder series, six classes would be made available to players to choose from, each with its own set of restrictions, although certain races have the ability to multi-class meaning that they can become a combination of classes. Each classes require certain prime requisites, or ability scores, to be at certain values before that character can become part of that class.

AD&D along with many other PnP RPGs at the time makes extensive use of an alignment system to determine a character's worldview and how they conduct themselves within society which would also be reflected in EotB's mechanics as well as that of its following sequels.

For example, a Lawful Good character would be by-the-book when it came to upholding the good in society while a Chaotic Good character would be more willing to bend the rules in order to provide the same. A Lawful Evil character might hold their word as their bond and be loathe to break it for anyone, but would only give it if confronted by someone whose power they respect or as a part of one of their fell schemes. As interesting as this was, the game did not make an extensive use of the potential that this system could bring to an RPG.

Character attributes would help determine what classes were available for certain characters and how well they would perform in them. In 2nd Edition AD&D, attribute scores of 18 were considered the highest possible in a natural sense, although racial bonuses and magical effects/enhancements in the form of spells or items would be able to raise them higher either temporarily or permanently in more rare cases. These are set as far as the game was concerned. Leveling improved a character's HP (hit points) and general abilities, but their base statistics would almost never change.

EotB and its following sequels would also allow the player to modify statistics during character creation with any number of changes that were limited only by the maximum level a particular attribute could be as determined by race.

Fighting in the game is handled through random encounters wherein experience, items, and gold are earned. The front ranks, determined by the two characters at the top of the party list, can engage in melee combat. All other characters must resort to ranged weapons or spells in order to join in the fight. An onscreen menu guides their actions and right clicking with the mouse on the appropriate icon, such as a warrior's sword, would cause them to act.

Camping is available for the player to rest and heal the party, memorize spells, and save the game when necessary.

As well as creating a party of player characters, during the adventure beneath the city of Waterdeep it is possible to find other adventurers who will offer their services to help the player characters in defeating Xanathar. 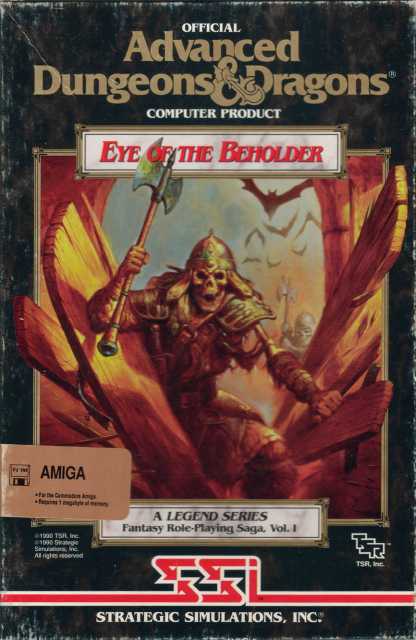