Dr. Robotnik's Mean Bean Machine is a Sonic the Hedgehog-based reskin of competitive puzzle title Puyo Puyo. Players battle the mad doctor and twelve of his underlings in order to save the denizens of Beanville.

Dr. Robotnik's Mean Bean Machine (Dr. Eggman no Mean Bean Machine in the Japanese version of Sonic Mega Collection) is a competitive puzzle game developed by Compile and published by Sega primarily for the Sega Genesis, with ports made for the Sega Master System and Sega Game Gear. The game is also included in several compilations, such as Sonic's Ultimate Genesis Collection for the Playstation 3 and Xbox 360. The Genesis version was not released in Japan until 2000, where a PC port of the title was included in "Sega Archives from USA vol. 2"; the Game Gear version was first available to Japanese audiences in Sonic Adventure DX.

Mean Bean Machine is, in essence, a reskinned version of the original Puyo Puyo. Though a more direct English translation of Puyo Puyo's Game Gear port titled "Puzlow Kids" was developed, the decision was ultimately made to change the game's aesthetics; allegedly, this was due to the belief that Westerners wouldn't accept a game featuring a little girl as the protagonist. The characters from Compile's Madou Monogatari series were replaced with characters from The Adventures of Sonic the Hedgehog, a cartoon series based on the Sonic franchise.

More than a year later, Puyo Puyo's Super Famicom port was reskinned with a Kirby theme and released as Kirby's Avalanche.

Colored beans fall from the top of the screen and must be cleared by connecting four or more beans of the same color. By doing so, the player generates Refugee beans that are sent to the opponent. Refugee beans, once they fall onto the opponent's field, cannot be matched with any other beans; instead, they are removed by clearing an adjacent set of colored beans. The first player that cannot bring more beans into their field loses.

In the game's Scenario mode, the player competes in one-on-one duels with Dr. Robotnik's robot underlings in order to save the bean creatures from being turned into robots. They are faced in the following order:

Exercise Mode lets players to match beans until they lose, while Vs. Mode allows two players to go head-to-head. The Game Gear version includes Puzzle Mode, which presents the player with several challenges.

Dr. Robotnik's Mean Bean Machine's gameplay is nearly identical to Puyo Puyo, right down to the AI behavior of each opponent. However, Mean Bean Machine removes the Beginner course that was present in Puyo Puyo. A new password feature is included that allows players to continue their progress.

Mean Bean Machine uses several audio and visual assets from Puyo Puyo. Carbuncle remains in the game; he is renamed "Has Bean" and given an all-new backstory. The battleground is taken from the backdrop of Puyo Puyo's early matches. Several of Mean Bean Machine's music tracks, including the Exercise, Vs, Password, and Ending themes, were either directly taken from Puyo Puyo or remixed from songs featured in the game. 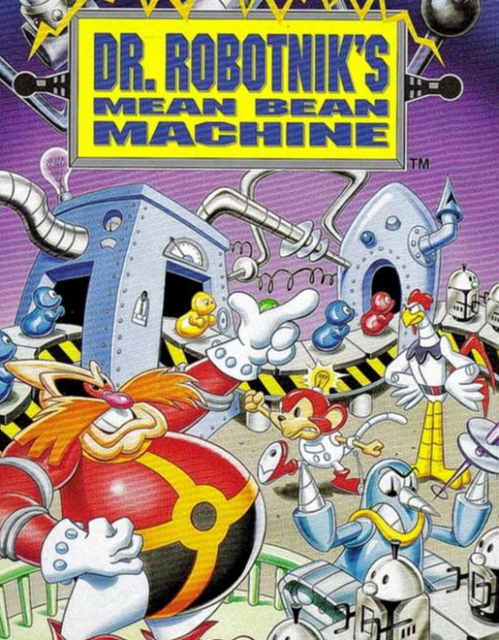