Fight to win. Fight to survive! Use the Wii Remote to fly a variety of aircraft throughout different scenarios.
PlayStation Portable PlayStation 2

Heatseeker is an aerial combat game released for the Wii, PSP and PS2, in which players have to fly through various different locations taking on an enemies in different scenarios. Players are equipped with a variety of different weaponry and have access to over 30 military craft in which they use to destroy the opposing enemy threat. Heatseeker was released for the Wii on March 30, 2007 in Europe, April 13, 2007 in Australia, and May 1, 2007 in North America. The game was developed by IR Gurus and Codemasters, and published by Codemasters.

The plot follows the story of the International Council's struggle to fight against the regime of Bae Jung Tae, a dictator with a large cache of nuclear weapons. Players assume the role of Mike Hudson and must utilize their flying and fighting skills to stop the enemy threat before it is too late and nuclear warfare is unleashed on all the countries that the International Council embodies. Missions take place ranging from Korea, the Caribbean and even the Antarctica. Players must blow up enemy craft and various land craft, like tanks and SAM missile launchers along with weapons of mass destruction to avert a nuclear crisis.

The game generally follows standard aerial combat controls, however, the Wii controls allow for much greater freedom and players can either use the Nunchuk like a flight stick, in which it is necessary to tilt the Nunchuk to control the direction of the aircraft and use the Wii Remote to use as a trigger for weapons. The alternative method on the Wii is to use the Wii Remote as a "pointer" and guide your craft by pointing where you want to go. The game offers both a first and third person perspective and also offers some destructible environments, players can destroy bridges to disable enemies traveling further, airports to stop more aerial reinforcements for the enemies, docks to disable enemies boats from being built and military bases which help the player stop enemy tanks and land vehicles being constructed. Heatseeker has a camera feature called "ImpactCam" which lets players see the destruction that they're missile has caused by following its path and seeing what enemy it hits.
Ace Combat 04: Shattered Skies Ace Combat 6: Fires of Liberation Ace Combat X: Skies of Deception Ace Combat 5: The Unsung War Ace Combat Zero: The Belkan War Ace Combat 3: Electrosphere Tom Clancy's H.A.W.X Ace Combat Advance Microsoft Flight Simulator AirForce Delta Storm Tom Clancy's H.A.W.X. 2 Iron Aces 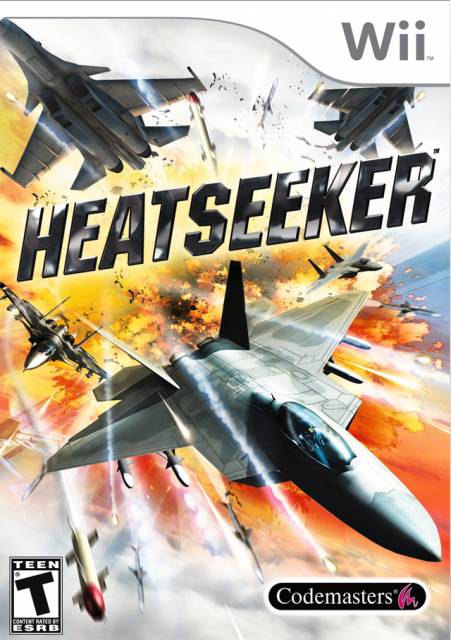