Dragon Buster is a dungeon-crawling, arcade platformer with RPG elements, released by Namco in 1985. It was later ported to various home systems. It featured several firsts in gaming history: the double-jump, the life meter, and the hub world map. It was also one of the first action games with RPG elements.

An early 1985 arcade platformer with action RPG elements, Dragon Buster is notable as the first game to feature a double jump. It was also one of the first games to include a life meter (along with Flash Boy and Punch-Out), known as vitality in this game. The game featured side-scrolling platform gameplay and a hub "world view" map similar to the later Super Mario Bros. series. It also featured hack & slash combat, like the later Tritorn and Legend of Zelda series.

Dragon Buster was developed and published by Namco. The game is a side-scrolling dungeon crawler, where the goal of the game is for the hero, Clovis, to rescue Princess Celia. Dragon Buster was later ported to a variety of home consoles, notably the Nintendo Entertainment System and the MSX. 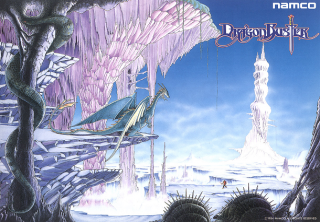