A 2D platformer featuring a chef who travels around the world collecting sentient ingredients that escaped his kitchen.

Out to Lunch (known in Europe as Pierre le Chef is... Out to Lunch) is a platformer from Mindscape featuring the eponymous Pierre le Chef. Pierre chases his missing food items all across the world, recapturing them with his net. He moves from Switzerland, to Greece, to the West Indies, to Mexico, to China and, finally, back to Pierre's native France.

The game was originally released on the Super Nintendo in 1993. It was later ported to the Game Boy, the Amiga and the Amiga CD32.

At the beginning of each stage, sentient food items escape his fridge and Pierre chases after them. He recovers them by tracking the food items across each stage, recapturing them with a net and depositing them in a cage. The player ought to be wary of Le Chef Noir, Pierre's archrival, who will periodically open the cage doors and let the captured food items out.

Food items will run from Pierre if they spot him. If the player is quick enough, they can be captured while their back is turned. If they start running, Pierre can quickly catch up and capture them. They can also be stunned by jumping on their head and captured safely. A certain amount of points can be earned depending on how efficiently a food item is captured. If a food item collides with Pierre, Pierre is briefly stunned and lets two of the food items he's carrying loose. Depositing food item regularly gets around this problem, but they can still be released by Noir.

In order to catch anything, Pierre needs to find the net on each stage. There's also a smattering of other items lying around: 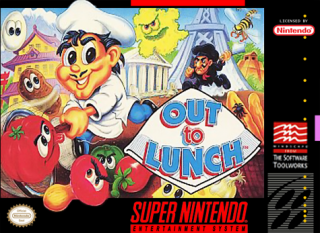