Narbacular Drop is a free first-person puzzle game that was made as a senior college project by students at DigiPen. It served as a proof-of-concept for Portal, the team's first commercial game after joining Valve.

Narbacular Drop is a puzzle game developed as a senior project by students at DigiPen institute of technology. The team that worked on this game eventually got hired by Valve to create Portal, a spiritual successor to Narbacular Drop. Therefore, a lot of similar ideas and concepts can be seen in both games.

The player plays as a princess named "No-knees" (this name implies her inability to jump), who is captured, but given the ability to make portals by a benevolent spirit. Without the ability to shoot or jump, the player is able to open up two gates that are interconnected. These gates operate like portals: whatever goes in one end comes out the other. Players can place these portals anywhere as long as it's on an earthy surface.

There is a community of people making custom maps for it and doing speed runs of crate runs.

As a tribute to Narbacular Drop, one of the Achievements of Portal 2 is called "Narbacular Drop". It is unlocked when the player opens a portal under the feet of their co-op partner while they are performing an emote animation. 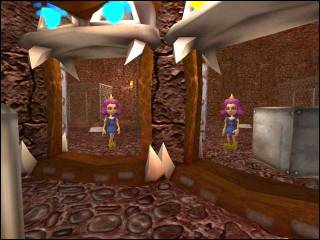