Age of Mythology is a real-time strategy game based on the myths and heroic epics of the ancient civilizations of Scandinavia, Greece, and Egypt, players control the Atlantean hero Arkantos and can invoke powerful god powers to turn the tide of battle.

Age of Mythology is a real-time strategy game from Ensemble Studios that centers around three civilizations: Greek, Egyptian, and Norse. Each civilization has three main Gods; therefore, there are essentially nine different factions to choose from. The game uses basic elements found in the popular Age of Empires series such as gathering resources, building structures, and assembling an army to overtake your opponent. The basic resources are food, wood, and gold; however, Age of Mythology takes it a step further by adding favor. Favor is essential because it allows you unlock extremely powerful mythological creatures as well as special upgrades. Each civilization has its own unique way of gathering favor. Another new feature added is the ability to use God powers, such as summoning natural disasters to disrupt your opponent. God powers can be the deciding factor between a win and a loss during a battle and can only be used once, so you must choose to use them wisely.

The game also featured a story based campaign mode which followed the story of the Atlantean hero Arkantos who travelled through the world trying to stop a villainous cyclops from releasing the titans.

The main campaign, entitled "The Fall of the Trident," story follows the Atlantean hero Arkantos as he travels through the ancient world, thwarting the schemes of Poseidon and his henchman, the evil Cyclops, who seek to release the Titans.

On his journey to Greece, Egypt and the North, he meets several different mythical heroes and gods from other religions, such as Osiris and Loki. He also takes part in historical events like the Trojan War.

"The Golden Gift," an additional campaign, was also available for download from Microsoft's website. This story follows two Dwarf brothers from the original campaign who set out to complete a giant golden boar for the Norse goddess Freyr.

The Greeks are a solid civilization that excels in both offense and defense. Their buildings and defensive structures are average; however, their units are the strongest and most expensive in the game. The three major Gods to choose from are Zeus, Hades, and Poseidon. There are different gathering camps for each resource and they stay in place wherever they are built, so it is important to plan ahead. Also, unlike the other two civilizations, there are three different structures needed to train the different units.

Greek Heroes are the strongest and most unique in the game. Each hero has his or her own strengths and weaknesses, and each hero is different. Many of the heroes have unique abilities that set them apart from the other civilizations, such as Perseus's ability to turn enemies to stone, which is why the Greeks are limited to four heroes. Heroes vary depending on which God you choose, and are essential components to a successful Greek army. They are decent against regular units, great against myth units, and can also collect relics.

In order to gain favor, the Greeks send their villagers to pray at temples. This can allow you to gain favor at a very quick pace; however, having your villagers producing favor will ultimately reduce the rate at which you gather resources.

The Egyptians believe in strength in numbers. Their units are the cheap and weak; however, they have the strongest buildings and defensive structures in the game. Many buildings are free, but farms, monuments, and units cost a lot of gold. The three major Gods to choose from are Ra, Isis, and Set. At the start of the game, an Egyptian player starts with a Pharaoh who can empower buildings to increase production, speed up building rate, and strengthen structures.

Egyptian heroes are the weakest overall. You start with a Pharaoh who regenerates if he is killed. It is possible to get two Pharaohs at once, depending on which minor gods you choose during the game. He's almost useless against regular units, but does well against countering myth units. He can also heal units, gather relics, and empower buildings making them perform their function quicker. Priests are also Egyptian heroes and are basically weaker versions of the Pharaoh. One major difference between the Pharaoh and priests is that priests can create obelisks, which is a building that acts like a watch tower.

Egyptians gain favor through the construction of five different monuments through which favor is gathered at a set rate. There are four monument types, and only one of each type may exist at any given time.

The Norse is an offensive minded civilization. Their buildings and defensive structures are very weak, but they make up for it with their massive armies. The three major Gods to choose from are Odin, Thor, and Loki. With Norse, the best defense is a good offense, and choosing this civilization you'll constantly find yourself on the attack or on the move. Not being confined to gathering resources in one spot, the Norse use a movable ox-cart as their gathering camp. Their infantry units also have the ability to build structures. This is helpful because it allows you to move your base to a new location quickly and easily. They also can rush easily since they are able to produce their basic infantry unit, the Uflsark, from their town center.

Norse heroes are called Hersir, and they aren't very strong against anything except myth units. However, they are easy to mass produce and it's cheap and easy to build a lot of them in a short amount of time. Hersir slowly generate favor and gain double the amount of favor when engaging an enemy in combat. They can also collect relics and build structures and are definitely a valuable asset to any Norse army.

Norse gain favor from engaging in combat. The more damage done, the more favor is gained. Hersir also slowly produce favor, and can gain a lot of favor in battle as well.

The music for Age of Mythology was done by Stephen Rippy and Kevin McMullan. 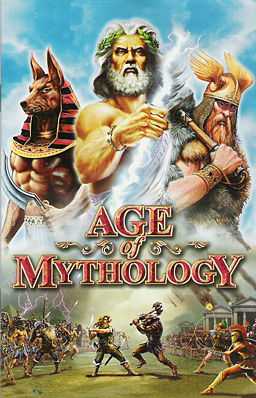