The first game in the Lunar series, and the second highest selling Sega CD game of all time, Lunar tells a story of love, betrayal, and redemption.

Lunar is a role-playing game developed by Game Arts and Studio Alex for the Sega CD. The game centers around the main protagonist, Alex, a young boy from a small town who dreams to one day become a hero like his idol, Dragonmaster Dyne. The game begins with Alex and his friends going on a child hood adventure and stumbling upon an ancient dragon. They then begin a journey across the world to gather the necessary power to become the next Dragonmaster, and save the world.

Game Arts set out to create a story that would break away from the, "hum-drum 'model" games that "had stories, but had no story-telling" when they created Lunar. They chose the Sega CD as their platform for its video playback capabilities and hired on animator and artist Toshiyuki Kubooka to oversee the planning of the video sequences and voice overs. Novelist Kei Shigema was then hired on to pen the script and plot to the game. The team decided to focus on on a fantasy world heavy in mythos and history that would gradually reveal itself to players over time. Studio Alex handled most of the developing of the title.

The American development and translation was handled by Working Designs. They completed the text translation in an 8 week marathon programming session. During the translation they added in their own humor, mostly in the form of pop culture references from the early 90s such as allusions to American commercials, celebrities, colloquialisms, products, and role-playing game cliches. Working Designs president Victor Ireland took the project very seriously. He often collaborated with the original Japanese development team. He also added in a couple of new sequences he felt enhanced the game and story, including the scene where we see Alex play the harp to awaken Luna.

Ireland's biggest contribution which many fans would thank him for is Lunar's packaging. He made sure extra effort was put into the game's packaging, giving the instruction booklet embossed lettering, and having seven separate disc stamps, each with different artwork, produced for the front of the game discs -- all in the effort to increase collection value. Below are stamps 1, 2, 4, 6, 7 (missing are 3 and 5). Stamp 1 is the most common and they get more rare as they go with stamp 7 being the most difficult to obtain. Disc One and Two look nearly identical. Disc 1 was manufactured by SEGA and they were not familiar with the "groove fill" process. For this reason Working Designs made Disc Two the same art, but filled it all the way. Working Designs also manufactured, under their direct control, discs 2-7 for quality assurance reasons.

The game was released in Japan on June 26, 1992 to critical acclaim, and became the number 1 selling game on the Sega CD of all time in Japan selling an estimated 100,000 copies, or nearly as many Sega CD consoles sold in Japan. The game launched on December 1, 1993 in America, also to much acclaim. It would go on to be the second best selling game world wide for the Sega CD, behind only Sonic the Hedgehog CD.

The game was been re-made on three separate occasions. 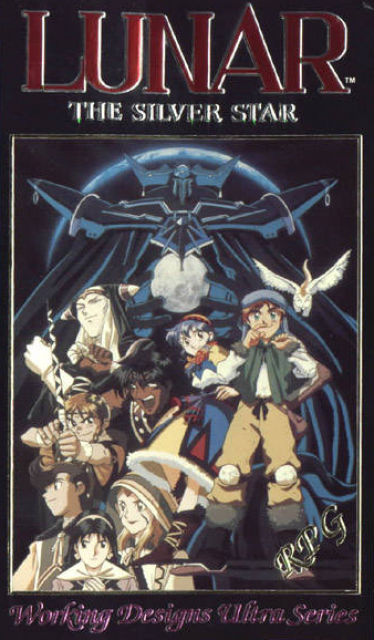