The 1993 improved version of Sensible Soccer with updated rosters. This is the version that would be ported to various consoles, such as the SNES, Genesis and the Amiga CD32.

This version of Sensible Soccer would be the one to get ported to many other systems, outside the Amiga/Atari ST/DOS 16-bit European home computer triumvirate. As well as the SNES and Genesis, it saw versions for the Game Boy, Game Gear, Sega CD, Sega Master System and the Amiga CD32. Occasionally, these versions were marketed as simply "Sensible Soccer" or "Sensible Soccer: European Champions", but were built on this improved iteration. The US versions of the game were called Championship Soccer '94.

The game is built to be easy to pick up but hard to master, and the pace of the game is very fast.

While the controls vary depending on the version, for the core Amiga/ST/DOS versions the player controls the soccer athlete who is nearest to the ball with the joystick. A simple press on the kick button will result in a pass in the direction the soccer athlete is facing. In order to shoot, the player must press and hold the fire button before releasing it and applying aftertouch if needed. Holding the stick in the opposite direction before kicking will result in an overhead kick. If the kick button is pressed while the ball is in the air will result in a (attempted) header of the nearest player. In order to make substitutions the player needs to wiggle the joystick left and right when the ball is out of play. The bench will appear and the player can change their teammates at will via menus.

The game has a distinctive graphical style. Players are 2D sprites with big heads. Sound is limited to ball bouncing, whistles and the occasional crowd noise. 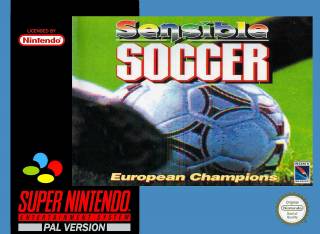