Simulate the development and progression of an alien species as it evolves from a single-celled organism to a sapient level, rises up through various stages of civilization, and eventually becomes a space-faring species.

Spore is the latest game from the prodigious brain of Will Wright and aims to simulate the development of an entire species. The player begins the game in the form of a microscopic organism that arrives on a planet via exogenesis or panspermia, deposited in the primordial oceans by a meteorite impact. From this point on, the player has the ability to change the physical shape of the creature, giving it different evolutionary traits depending on what path the player wants his life form to take. Eventually, the creature evolves to the point of sentience, and a new gameplay mode begins in which the species establishes its own civilization. Cities are built, technology is researched, and eventually the player's species becomes capable of space flight; the player is able to first explore and colonize their home solar system and later, the entire galaxy. Will Wright has stated that the game's overall goal is to get to the center of the galaxy, and that the game does, in fact, have an ending. While there is no hard ending that acts as an end to gameplay, the final space section culminates in a one-off meeting at the galactic core where you are rewarded with the terraforming staff of life item.

EA is already planning Spore not just as a game but an entire franchise. The property has already been targeted for post-release expansion packs, Wii, and iPhone adaptations are already underway. Additionally, EA has announced an iTunes-style "Spore Store" which will be built into the game itself, allowing for the digital distribution of future Spore expansion packs as well as Internet sales of Spore merchandise including t-shirts, posters, a collectible card game, and possibly custom figures created from 3D prints of submitted creature designs.

The gameplay of Spore takes place on a massive scale, and as such, the game generates many of its assets through procedural programming and system inter-connectivity. The majority of Spore's content is generated both by the game itself, by the player in his own game, and by other players. Spore is being referred to as a "massively single-player" game, in which the procedurally generated content (animals, sentient species, planets, vehicles, civilizations, and so on) of each copy of the game are spread to every other copy of the game on the planet, as long as that person's computer is connected to the Internet. Spore's gameplay is comprised of five individual phases, each based on a previously released franchise and genre. The initial cell or "tide pool" phase is based on a blend of Pac-Man and Flow, the creature phase is based on World of Warcraft, the tribal phase is based on Populous, the civilization phase is based on SimCity or Civilization, and the Space phase is based on Master of Orion.

There are a total of eight editors in the game, governing the creation of vehicles, buildings, creatures, and more. Each editor has a built in complexity limit to prevent the overpowering of vehicles or creatures. However, this may be easily overridden by a console command.

The game consists of five stages in which you will play through using various play styles while following the life cycle of your creature and the galaxy that they are in.

After a cinematic opening of a meteorite crashing into a planet, the player begins his creature's journey as a microscopic cell, or microbe. During this stage, using the control of the mouse, you must survive by eating smaller microbes and avoiding larger ones, similar to gameplay in Pac-Man or flOw. After you have eaten enough, the microbe will lay an egg, allowing you to enter the first editor. In the Microbe Editor, you edit your cell with various parts including weapons, eyes, appendages, etc. These will aid you in survival and also grow your creature. After you leave the editor, your cell enlarges and the camera zooms out, allowing you to see even larger and more versatile microbes. After eating enough food, you progress into the Creature Stage.

Upon finishing the Cellular Stage, you will begin constructing your creature that will become your official species throughout the rest of the game. The Creature Editor (along with the other editors) will function the same way as the Microbe Editor, however will allow you to create a sentient, land fairing creature using arms, legs, eyes, mouths, etc. You will then need to carry out tasks such as eating, communicating, and eventually mating. You will encounter many other forms of creatures, both predator, prey, and your own species, and you basically play in a third person free roam. By doing so you will earn DNA points for the editor and evolve your brain, which is required to move onto further stages. After visiting the editor multiple times and meeting the requirements for brain level, mating with another creature of your species will allow you to advance to the Tribal Stage.

After mating, your creature becomes sentient, which means it is intelligent enough to communicate and hold relations with other creatures. The gameplay style now switches to somewhat of an RTS; you can now control multiple creatures of the same species. The goal of this stage is to grow your tribe to fifteen members or conquer/ally with five other tribes on the planet (no matter what the species) by way of violence, diplomacy, or religion. Each tribe has a hut, which acts as a base of operations and can have many things added for the tribe members, such as for entertainment and weaponry, however at the cost of food. Your tribe also has 2 special abilities based on how you played creature, for example a omnivore type creature in tribal will be able to summon all creatures around it at the moment to help in combat and will be able to cause a giant sea monster to knock fish out of the water for free food.

When the Tribal Stage is complete your creatures move on to build a city. Gameplay still acts as a RTS, however also adds in the need to maintain your own city, such as Sim City. Once again the goal is dominate the other cities around the planet, however with the addition of having to collect gas from geysers spread across the planet and keeping your enemies away. Cities are obtained in one of three ways. The first two involve building military or Religious units and sending them at a city. If victorious it will be conquered or converted respectively. Both of these methods likely will start a war. The third way is a peaceful method is building Economic units and sending them to open a trade route, leading to you eventually making an offer to buy the city.

The final stage of the game allows you to construct a spacecraft, which grants you many abilities to help you explore and possibly conquer the galaxy. Hundreds and hundreds of solar systems are available to be explored, and with the use of the many tools that your spacecraft will gain you will be able to manipulate planets, scan for intelligent life, interbreed creatures, and even obliterate a planet entirely, which in turn may cause a new asteroid belt to form. During your encounters with other intelligent species, you may choose to once again settle things peacefully or start an intergalactic war.

EA has limited each copy of Spore to five individual installs by the user at any given time; Also the game will re-authenticate any time you add new downloaded content from the Sporepedia. If the user surpasses the five install limit they will receive an error message that will ask the user to verify the registration code and to reinstall the game. Any further issues may be forwarded to EA's support service.

Ironically despite the heavy restrictions put on Spore to prevent piracy it Spore turned out to be the most pirated game of 2008 with over 1,700,000 downloads between its release in September and the lists creation in early December by TorrentFreak. Spore also earned the title of being one of the fastest pirated games of 2008 with over half a million people downloading the game within 10 days of its general release. This is no doubt aided by the fact that Spore was available on torrent websites almost a week before it's official release date.

In an interview with Eurogamer posted August 11, 2008, Will Wright claimed that most of the "religiously" oriented criticism of the game has come from what Wright called "Militant Atheists", instead of the expected religious audience.

A newly launched website called AntiSpore.com which claims Spore is teaching kids evolution. Also the website claims to want the E rating pulled and made into a M Rated game. The website was later revealed to be a hoax following references to the often implausible nature of content posted on the internet and Poe's Law.

Spore does not support anti-aliasing and is limited to 30 frames per second at all times. Also, by not being displayed at the standard LCD monitor refresh rates of 60 fps, you will notice screen tearing, which can be very distracting during the later parts of the game. Unfortunately, there is currently no patch to fix these issues. Graphics driver software, however, such as Nvidia forceware, can be used to enable anti-aliasing, texture filtering, and vertical sync.

Spore's limited edition is called "Galactic Edition" and will include the following bonus content:

Spore Galactic Adventures was released in June 2009, It included a mission creator and allowed players to beam their creations down to planets and complete missions with them.

Using the Mission creator players can effectively create their own games filled with any creations from the Sporepedia.

For Computers with Built-In Graphic Chipsets

The game will not run on PowerPC (G3/G4/G5) based Mac systems (PowerMac).

Spore will not run on the GMA 950 class of integrated video cards. 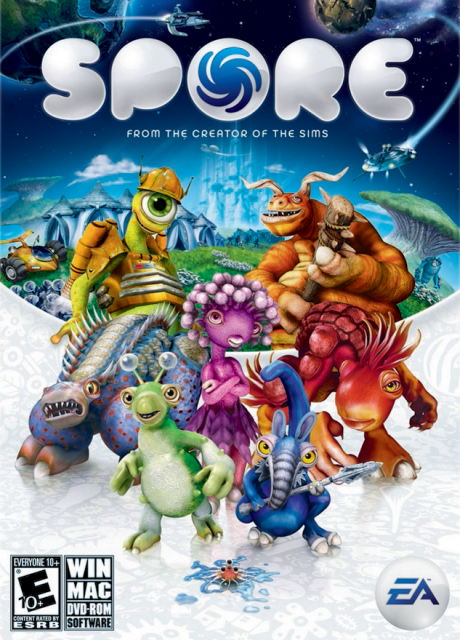