Inspired by the movie "Alien" Project Firestart is a horror themed action adventure for the Commodore 64.

Developed in 1989 by Dynamix and published by EA, Project Firestart used the technology of the Commodore 64 to it's limits.

The story of the game is set in the year 2066 where a genetic experiment went awry and, as a result, genetically engineered monsters run amok aboard the space research vessel Prometheus. The player is sent to investigate the matter and, if necessary, start the ship's self-destruct sequence and escape before it explodes.

While not a commercial success, Project Firestart pioneered several features that were to become a hallmark of the survival horror genre. Disempowering the player with limited ammunition and a gun that was largely inefficient as well as journals/logs and e-mails the player would find over the course of the game, telling the events prior to the protagonist's arrival. 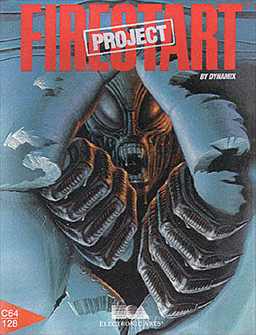