Explore the lush but dangerous Yggdrasil Labyrinth in this old-school first person dungeon crawler on the DS, that gives players the ability to draw their own maps.
Nintendo DS

Etrian Odyssey is a first-person turn-based dungeon crawler for the Nintendo DS. It was released on January 18, 2007 in Japan, May 15, 2007 in America, and June 6, 2008 in Europe. The game was developed by Kazuya Niinou, when he was still at Atlus, and features a synthesized soundtrack from renowned composer Yuzo Koshiro. Etrian Odyssey draws inspiration from classic 80's dungeon crawlers like the Wizardry franchise, and is notable for its punishing difficulty curve and the use of the touch screen to draw maps, become something of a cult classic. A sequel, Etrian Odyssey II: Heroes of Lagaard was released in 2008.

Adventurers from around the land flock to the town of Etria, hoping to explore the Yggdrasil Labyrinth, a mysterious wood full of hostile monsters and tough obstacles. For fame, gold or genuine interest the player's group of 5 adventurers comes as well, and proves to be powerful adventurers with the potential to dive deep into the depths of the Labyrinth. The Etrian government takes notice of this and gives the adventurers this objective: to conquer the Labyrinth, and uncover its dark secret.

Etrian Odyssey is a turn-based dungeon crawler, and most of the game takes place in a singular dungeon, the Yggdrasil Labyrinth. There are a total of 30 floors in the dungeon, 5 per strata, and the main game covers the first 25 floors. The floors are not randomly generated, and has many secret spots that require players to come back at a later date.

Players navigate the tile-based dungeon in a first-person perspective similar to Phantasy Star, taking a step a turn. There is a constant day-night system , with the in-game time displayed on the top left corner of the screen. Battles are not entirely random, with the chance of a battle occurring increasing with each step a player takes. A proximity gauge on the bottom right corner of the screen informs players of how close they are to encountering a group of enemies. There are also many different events, item collection points, and treasure chests lying around the dungeon.

Etrian Odyssey also features special mini-bosses that lurk on the map, called F.O.E.s. This creatures will wither roam about the dungeon on a set path or guard a certain spot, and will spell certain doom for a player unprepared for them. Some F.O.E.s will relentlessly chase the player down if spotted, while others are just content to continue on with what they were doing. F.O.E.s can been seen from the first person perspective as a glowing orange ball, and will show up on the map on the lower screen on spots the player has been to. It will also show up on the map if it was within 3 squares of the player.

Combat in Etrian Odyssey is a traditional turn based format, with players choosing commands from a menu. All enemies are visible on the top screen and the party's health, mana (TP), condition and formation are displayed at the bottom. When defeated, enemies give experience points, and sometimes drops materials can be sold to unlock new items and equipment in the store. Some special material drops require players to achieve special goals in battle, like killing an enemy with certain types of attacks. F.O.E.s and bosses also give experience, and item drops, at a much better rate than normal encounters. These special enemies respawn on the map several days after killing them.

A party can have a maximum of 5 characters at any time, but players can create up to a maximum of 16 characters, and rotate them into the party if needed. Players can arrange their party into 2 rows: the front and the rear, with a maximum of 3 per row. The front row deals full damage with their melee weapons, but suffer from more damage, and vice versa. If the front row characters fall in battle, the rows are shifted, and can only be changed back after the battle. During battle, characters gain boost points every time they act, and a filled boost bar will allow the character to use a skill at a much greater power. A character can have a maximum of 3 buffs and debuffs, and buffs/debuffs last 5 turns from when it was used.

Times passes on even in battle, and if the player engages in combat near an F.O.E., it will sometimes enter the battle, turning a normal battle into something much more dangerous.

A unique feature in Etrian Odyssey is its cartography system, where the player draws their own map on a grid using a wide variety of tools and symbols. This map does not directly affect the floor layout, but allows players easier access to a customizable map at any time. This discards the need for additional documentation by the player outside the game, a problem faced by many older dungeon crawlers of this type.

The player has access to many different tools to create their own map, and can use whatever tools they want at any time:

Navigation in the game's only town, Etria, is through a series of menus. Locations players can visit include the inn to rest up, the apothecary to revive fallen characters, the shop to buy and sell items, the bar to pick up optional quests and gather information, the explorer's guild, and the Radha Hall, to receive story missions. Players can recruit and re-spec characters, take on quests, rest and equip their characters only in town. Etrian Odyssey also features a item unlock system, where all materials sold to the shop go towards unlocking certain equipment. Some more powerful equipment require players to recollect their materials to purchase more copies of it.

There are 9 classes in Etrian Odyssey, and 2 of them can only be unlocked later on in the game. Players can choose from 4 different designs per class, 2 of each gender. The character art was done by Japanese illustrator Yuji Himukai.

Each class has 21 skills available, and while some are repeated between classes, most are exclusive to a single class. Leveling up earns the adventurer a skill point to use on learning a skill, and characters have a maximum level of 70. Some skills have other skills as prerequisites, forming a skill tree. Each skill may be upgraded 10 times.

Skills define a character class, but points can only be used once, which means players will have to assign skills strategically. Characters with useless skills will slow the party down. It is possible to retrain skills by having a character rest at the guild hall, but at a cost of 10 of the character's levels.

Etrian Odyssey did very well with fans and sold top tier for an Atlus title -- it did so well, in fact, that a sequel was created. Today it is a cult classic, loved by those looking for an authentic old-school experience on more modern hardware. Critics had mixed reactions, with those that loved it, hated it and everything in between. It holds a middling 75 Metascore on aggregate website Metacritic.com. 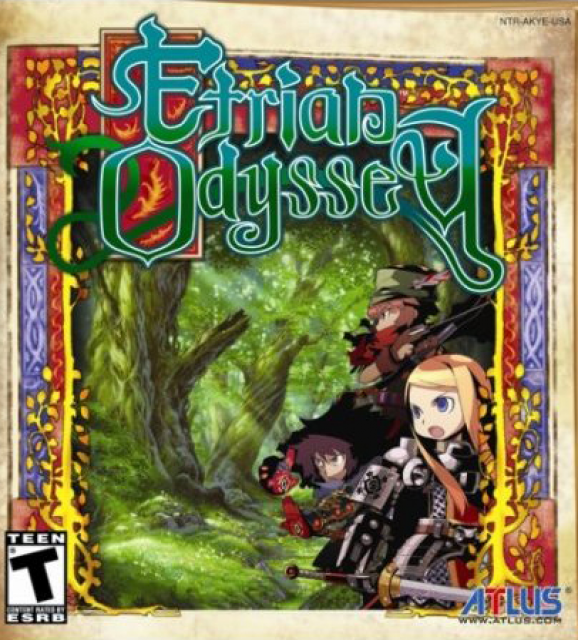