Kirby's Avalanche is a puzzle game that fuses the gameplay of Puyo-Puyo with a distinct Kirby theme.

A SNES localization of Japanese game Puyo Puyo, Kirby's Avalanche was never released in Japan. After Sega's successful attempt to bring Puyo to the West with Dr. Robotnik's Mean Bean Machine for the Sega Genesis, Nintendo wanted to port Puyo Puyo to the SNES with a Nintendo character. Hal Laboratory, Inc. and Compile developed Kirby's Avalanche and the game brought many firsts to the Kirby franchise. The soundtrack contains remixed tracks from Kirby's Adventure and Kirby's Dream Course, with one track from Puyo Puyo. It is the first game in the Kirby series to have voices, and Kirby and other characters between rounds speak in complete sentences. It is also the first game to call Meta Knight by his name and where he appears with his current design with sword and cape.

Like Puyo Puyo, gameplay consists of two colored blobs falling from the top of the screen. To clear these blobs, the player must match at least three same-colored blobs horizontally or vertically and any blobs left over will fall into the space. If blobs are cleared in a chain reaction, the opponent has boulders fall on their screen, which can only be cleared by popping blobs directly next to the rocks. The number of boulders dropping on the opposing player depends on how many blobs were popped and how many chain clears happened in the chain reaction.

The single player campaign has 3 practice levels and 13 stages, each against a different Kirby enemy. In it, King Dedede challenges Kirby and other Dream Land denizens to a Avalanche Contest in Dream Fountain. There is also a versus mode. 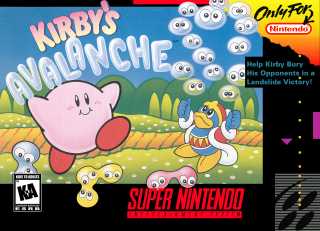