The sequel to the acclaimed original 4X game in which the player commands an empire in his quest to conquer the galaxy by multiple means.

Master of Orion II: Battle at Antares (Abbreviated to MOO2 in some circles) is a turn-based strategy game developed by Simtex and designed by Steve Barcia and Ken Burd. Published in 1996, MOO2 puts you at the command of an emerging race in a galaxy where you can choose how to conquer the stars around you. Playing on the ' 4X' principle, a term penned by Alan Emrich in his September review of Master of Orion for 'Computer Gaming world' which stands for: "eXplore, eXpand, eXploit and eXterminate". Simply put, the game allows you to finish in multiple ways, be it peaceful or aggressive, passive or direct; all roads can lead to victory...or defeat.

Long before the start of the game, two races, the Orions and the Antarans, fought a war that ripped a scar across the galaxy leaving devastation wherever the battlefield lay. The Orions were eventually triumphant and, being the enlightened race, rather than kill the Antarans, the Orions trapped them in a pocket dimension. After their victory, the Orions left the Galaxy, leaving only a 'Guardian Ship' behind containing Loknar as a pilot. 'The Guardian Ship' guards the Orions' original homeworld, which is conquerable by the player. This planet is usually the best planet, in terms of resources, in the galaxy. With this planet the player also gets certain un-reasearchable technologies and the alliance of Loknar and his ship.

A little after the game starts. the Antarans break out of their dimensional prison and attack races randomly with increasingly powerful fleets.

There are three ways to win Master of Orion 2:

Victory cannot be obtained by conquering or becoming the 'Master' of Orion. Contrary to the title of the game.

Listed below are the 8 technology branches and examples of relating technologies:

Each technology branch is divided into tiers, each of which contains 1 to 3 technologies. Only one technology is researchable per tier unless the race has the Creative perk. Creative races reasearch all tech per tier, (unlike normal races which only get to choose one), uncreative races get a random tech per tier.

Other ways to obtain Technology include: Trading, Spying, Planetary Conquest, or Capturing and Dismantling ships.

Diplomacy in Master of Orion 2 is quite vast in it's scope, with a large range of diplomatic negotiations available:

The Diplomacy screen also allows allocation for the player to allocate spies for both offensive and defensive positions.

Space Combat is controlled in Master of Orion 2 in two ways, each of which the player may choose at the start of the game:

Planet bombardment or invasion can only commence when all ground to air defenses, Orbiting Bases and Ships have either been eliminated or fled from battle.

Ground Combat is automated in both modes much like Strategic mode above the battle is automated but it is displayed in 'real time' for the player to watch. Variables include: Numbers, offensive and defensive technology, Racial benefits and Leaders (were present).

Depending on ship size every ship requires 'Command points'. These points are provided by Orbital Bases which can be constructed at cost above the players colonies. Some technologies allow an increase to how many points each Orbital Base can provide. Command Points can also be bought, this occurs when the amount of points needed total for all the ships in the players fleet, exceed the command points available. This is quite costly and normally is used as a temporary measure.

Master of Orion 2 was originally developed for MS-DOS, which was followed by a Windows 95 version and then a Mac OS version. Currently many fan made patches and compatibility tweaks keep the game playable on modern operating systems.

Master of Orion 2 supports a multitude of ways to play with others,

Received the Following scores from the following publications:

Sequels, Prequels and Past Games

A sequel to Master of Orion 2, Master Of Orion 3, was published in 2003; which received unfavorable reviews. 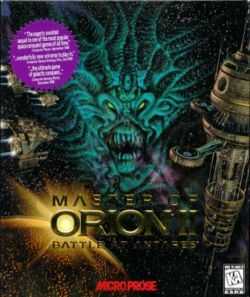