Shade: Wrath of Angels is a third person adventure game where players took the role of a person who is looking for his brother while fighting various enemies throughout the game.

Shade: Wrath of Angels is a 2004 Microsoft Windows and Xbox game produced by Black Element Software and published by Cenega. The original name was Nefandus, but later was changed to Shade: Wrath of Angels before its release. The history revolves around an ancient war between angels and gods.

Shade: Wrath of Angels is a third-person action-adventure game where players play as a nameless protagonist who must fight off various creatures while looking for his brother. The player must travel across different dimensions with 4 different chapters to complete. It has many elements seen in games like Tomb Raider and Prince of Persia. The game contains a mix of exploration, jumping across gaps and ledge grabbing, puzzle-solving, and straightforward combat with a variety of weapons like a magic sword, a pistol, a crossbow and a transformation, similar to the Dark Prince in Two Thrones, referred here as "demon time". Players can also use magic to kill several enemies like Medieval England knights, demons, zombies and Egyptian warriors.

The game starts with a tutorial to explain various aspects of the game.

The tutorial goes on as the player sleeps, and he plays the tutorial in his dream. After the completion of the tutorial, the player goes to a town on receiving an invitation from his brother 'B'. On his latter 'B' has claimed to have discovered an important archaeological site, which appears to be a very primitive one. But on reaching the town, the player is amazed to find out that nobody is anywhere.

He reaches the Hotel where his brother has written to be boarded. But on reaching the Hotel, he finds nothing but a pistol left by his brother for him. He decides to check the Church but on his way downstairs, he is stunned to see a zombie, in the lobby.

He however shoots the zombie and goes to the Church, only to encounter two more walking dead therein. After dealing with them, he finds a secret passage and moves into it to descend down and finds an orb. After the player comes out of the room with the orb, a misty figure appears and reveals to him a fearful secret.

The figure reveals to the player that he is the angel of Faith, and the orb he is carrying is the heart of the angel.

The Angel of Faith asks the player to release the other three angels to bring his brother back. When the player agrees, the Angel gives him the her loyal servant, a single-eyed red demon to help him on his quest.

The player is teleported by the angel to each of the three worlds where the pieces of the hearts of the other three angels are kept, the first being in the world of undead knights (themed on a medieval period with walking dead, the zombies and undead knights), the second being in the Pyramid of Egyptian God Seth (themed on pyramids, with living statues, mummies and undead worshippers of mighty Seth) and the third being in the world of eternal darkness, the 'Shadowland' (themed on a shadowy plain with creatures of darkness everywhere).

But on collecting the three hearts of the angels and reunifying them, the angel of Faith reappears and reveals herself to be the dark angel, who opposed the Gods and set the war between the four worlds. The player vows to stop the evil by breaking all the hearts of the angels, but the other three good angels appear and ask the player to destroy the demon, who helped him on his quests.

The original score for Shade: Wrath of Angels was composed by Jaroslav Kasny and is available for download at the game's official website. 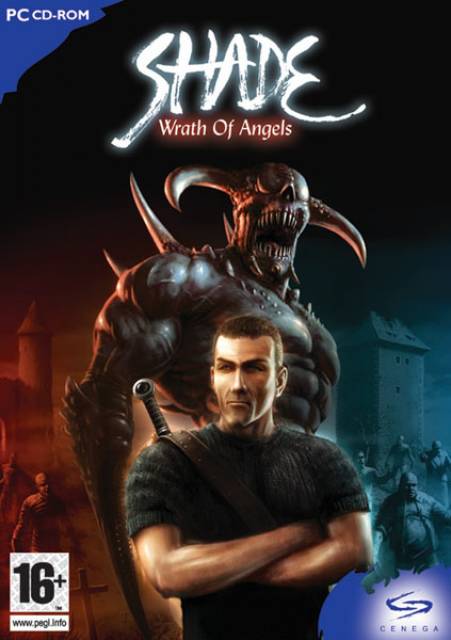