Players embark on a first-person adventure to uncover the secret of the lost city of Atlantis.

Timalapse is a first-person puzzle-adventure game developed by GTE Entertainment. The game was released in 1996 on 4 CD-ROMs.

Players are called to Easter Island by their friend, Professor Alexander Nichols, who claims to have found a connection to the lost city of Atlantis. Upon arrival, the Professor is nowhere to be found, leaving his journal and camera behind. The player eventually uncovers a Timegate on the island that allows for travel between ancient civilizations, with the Professor trapped inside.

Tasked with obtaining a Gene Pod from each of the eras to progress, the player explores three ancient civilizations that have all been recently abandoned by their people. Along the way, a being constructed out of energy known as "The Guardian" is introduced as a mysterious and knowledgeable force.

There are five explorable areas in the game:

After all three Gene Pods are collected and their respective DNA analyzed, the portal to Atlantis opens. Inside, the player locates Professor Nichols and traps The Guardian in a stasis tube. Freeing the professor destroys the lost Timegate and initiates a countdown to launch Atlantis into space, leading to one of the game's multiple endings.

During one possible outcome the phrase "The Adventure Continues...Timelapse 2: Homeworld" is displayed, hinting at a sequel in the works. However, shortly after the release of the game GTE Entertainment shut down and any plans for a sequel were lost.

Dust: A Tale of the Wired West Titanic: Adventure Out of Time Beyond Time Shivers Riven: The Sequel to Myst Lighthouse: The Dark Being The Journeyman Project 2: Buried in Time 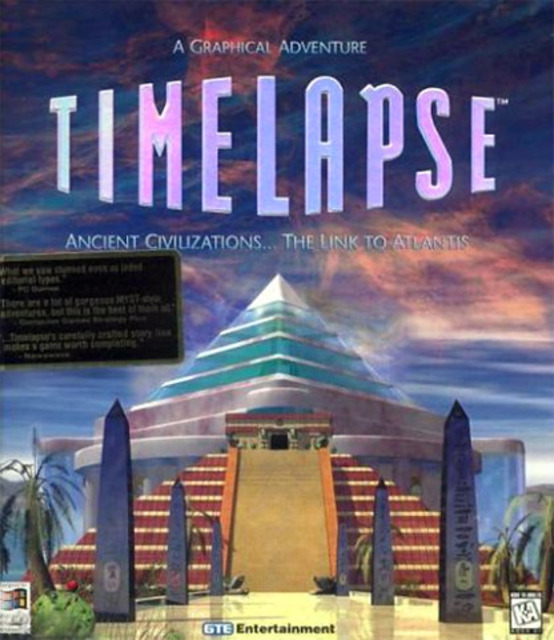