The seventh game in the Pokémon series. A remake of Gold/Silver with minor changes, as Yellow is to Red/Blue, Emerald to Ruby/Sapphire, and Platinum to Diamond/Pearl. The plot is generally the same as gold/silver with a few new subplots added involving the legendary Pokémon Suicune and the Unown. This was also the first game in the Pokémon series where you could choose the gender of your trainer. Also it is the first Pokémon game where the opposing Pokémon each have a unique entry animation.

Besides minor graphical changes, such as the new animated sprites for the Pokémon, the biggest addition was the battle tower, allowing players to participate in stadium-like battles.

Pokémon Crystal follows closely the formula of the previous games, most notably Gold/Silver. You start the game in your home town and start capturing and training Pokémon aspiring being the greatest Pokémon trainer in the world. For that the player has the chance to choose the gender of the main character and choose which Pokémon he/she wants to start the adventure from three choices given by Professor Elm, Chikorita, Cyndaquil or Totodile. The player is able to buy Pokéballs and try to capture wild Pokémon, though only six can be held at a time for battle against wild pokemon and other Pokemon trainers. Any other pokemon captured when the belt is full will be stored and will be available for exchange at any PC found in Pokémon Centers.

The player will have to travel through the world of Johto training Pokémons and battling the 8 gym leaders for badges, used to be allowed into the Elite Four, the very best trainers around, and the Elite Champion. The battles are set in turns with each Pokémon having a maximum of 4 attacks each, the Pokémon have a health gauge which when an attack is received it goes down, when it reaches zero the Pokémon faints and is unable to fight, the winner is the trainer who succeeds in taking down all Pokémon from the opposing trainer. When an pokemon is defeated, the trainer's pokemon receives experience points. When a Pokémon faints it can be recovered using items or by stopping by at any Pokémon Center and requesting the services from Nurse Joy, the Pokémon recovery is free of charge.

Like before, this version features a rival for your character as well, this player will begin the adventure at the same time as you and will be advancing at a similar pace to you, at key points in the game the rival will appear and challenge the player to a fight. Aside from the rival the player can find several other players along the way, they will have increasing level of experience as you advance in the game, and can be a source of both experience for your Pokémon and money; though Pokémon that belong to other players aren't allowed to be captured, while wild Pokémon, even though generally handing away less experience points, give the opportunity for capture. The money can be used at Pokémon Marts to buy many types of items.

Along with many from the previous games, this game brings 100 more Pokémon reaching the number of 251 unique Pokémon available (151 of which come from the previous generation). To capture every single Pokémon the player has to exchange monsters with the games it was based upon, Gold/Silver, and the previous generation, Red/Blue/Green/Yellow, though the Link Cable, connecting two Game Boys and allowing two players to battle or exchange their Pokémon at will. This system of not having a main version with all Pokémon available has been in the series since the beginning, and is still present in recent games. installments of the series.

This version also includes the day/night system, as well as the real time and the days of the week recorded in the cartridge. It actually has a major influence on the game, for instance, some Pokémon only appear in the wild at night, while others will only appear in a certain day of the week. The Phone system is also present here, which debuted in Gold/Silver, some Pokémon trainers in the game will get your phone number and will eventually call you giving some hints about the location of items, Pokémon, or inviting you for a battle. This makes possible for some trainers to be replayed even after you beat them, most of them are still one battle only, like it was in the past. In crystal however, the rate at which trainser call you is reduced, and many offer you items they find. there are only 10 slots available in the phone's memory for calls, and any previous trainer's number an be deleted and re-added to make space for others.

The system where you have to get badges throughout the world to be allowed to enter the Elite Four and try to become the greatest Pokémon Trainer around came back in the sequel to RBY. You collect 8 badges in the Johto region, to eventually challenge the Elite 4. Eventually, when all 8 gym leader are defeated in the Johto region and the Elite Four is also defeated, you'll have the opportunity to go back to Kanto , the region of the Original generation, to rematch on all past Gym leaders, giving you a total of 16 Gym Leaders and 16 possible badges.

When the Elite Four is defeated, you'll have the opportunity to go back to Kanto and re-battle the upgraded eight gym leaders from the previous game. Professor Elm will give you a ticket to S.S. Aqua docked in Olivine, if you decide to board, you'll end up in Vermilion where S.S. Anne was docked back in Red/Blue/Green/Yellow. Now you can explore Kanto's Gyms, pretty much in the order you want. The 2 differences from RBY, except for the order, is that Koga is not longer a Gym Leader, since he's now on the Elite Four, and left his gym leadership to his daughter, Janine, and that Blue now runs Viridian City's Gym.

The Elite Four works pretty much like in the previous, you first face the four members of the elite to then battle against the Elite Champion for the title of greatest of all. Bruno from the previous Elite mark a come back, while the previously gym leader Koga appears as one of the four.

Legendary Pokémon are Pokémon generally powerful, unique Pokémon,such that there is only one of each of them. These Pokémon have more experience than the rest, and can be found in already high levels ranging from 30 to 70. Like Moltres, Articuno and Zapdos were the legendary birds of the previous games, this time there are Legendary Dogs, called Entei, Suicune and Raikou. There are also two new birds, Lugia and Ho-oh. And a time-traveling Pokémon called Celebi.

Location - When you arrive in Ekruteak City, enter the burnt tower, where you'll fight your rival. when you win, you'll drop into a hole with 3 statues. They will awaken as the 3 Legendary Dogs, but Suicune will encircle you. Entei will flee and require to be found around the map randomly.

Location - After receiving the Clear Bell in the Radio Tower, head to Tin Tower and you'll battle Suicune.

Location - Raikou will awaken with its bretheren, and is available in the wild in the same manner as Entei.

Location - With the Silver Wing in hands, acquired in Pewter City, head to Olivine City and use Surf to surf southwest, Lugia is inside the Whirl Island Caverns. carrying a pokemon with flash is advised.

Location - The way to find Ho-oh is substantially harder than it was in Gold/Silver. Ho-oh sits on Tin Tower like always and to reach him you need the Rainbow Wing. Getting the Rainbow Wing is the problem, you need to have captured all legendary dogs, Entei, Suicune and Raikou, and have all the 16 badges. When reached all the requirements head to the Tin Tower and talk to the upper center old man, he'll hand you the Rainbow Wing and the stairs to the higher levels of the Tin Tower will appear, go climbing your way through until you reach the chamber of Ho-oh.

One of the aspects of Pokémon Crystal that got most players excited prior to the release was the rumor about being able to capture the Pokémon number 251 Celebi. while it is possible to get in the Japanese version of the game, the Pokémon was removed from the American and European releases. The Goldenrod Pokémon Center was originally a larger place and had the possibility to allow the player to connect the Game Boy to a cellular phone, since the cellphone industry on the rest of the world wasn't as advanced as it was in Japan, it was later removed from the European and American versions of the game. In the original, the player would receive the GS Ball, then would have to go to Azalea Town and give it to Kurt, who would hold the ball for a day for examination before handing it back to the player. The player would then be able to put the ball into the shrine in Illex Forest, and Celebi would appear giving the player a chance to capture it at level 30.

The only possibility for non-Japanese players to catch the Pokémon was participating in Nintendo events or by Game Shark. the event is fully translated in the the English version, and an be triggered by sharking a GS ball.

Arguably the biggest addition in Crystal is the battle Tower, Located to the West of Olivine City. However the Battle Tower had many changes between English and Japanese Versions, in the original you can also utilize the cellphone features. In the Battle Tower you can register Pokémon in rounded levels going from level 10 to level 100, battling seven trainers for prizes. The core rules are as follows.

One of Crystal's biggest features only in was the ability to trade and battle with the use of the Game Boy Color Cellphone adapter. This feature allowed players to make use of their cellphone's networking capabilities to make trade requests and engage in trainer battles with anyone playing the game in japan. This was performed in game from the Goldenrod City Pokemon Center. This Pokemon Center was changed to include a cell tower on the roof where players would go to make use of the Cellphone networking feature. this feature is similar to the Wi-Fi feature of Diamond, Pearl and Platinum, albeit limited only to Japan. 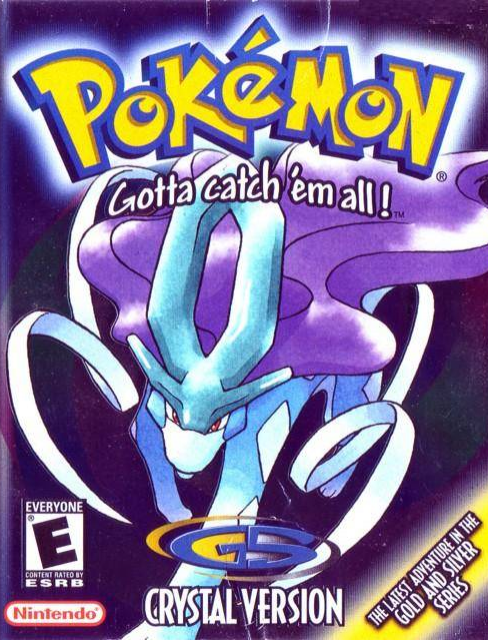