The first football game to feature the NCAA license and its associated teams, predating EA's use of the license by several years.

NCAA Football is an American football game developed by The Software Toolworks and published by Mindscape for Genesis and SNES. It features multiple real teams from the NCAA (National Collegiate Athletic Association) competing via a horizontally-oriented perspective. NCAA Football was released several years before EA Sports would procure the name and license for their NCAA Football series: at the time, EA Sports's college football games were known as Bill Walsh's College Football.

The game features sixteen college football teams, all of which are used as part of the games tournament mode. 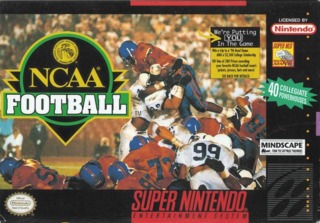