Expanding on the foundation put in place by Retro-Evolved, Geometry Wars Galaxies takes this unique, colorful top-down shooter's formula to the next level, offering various additional modes, more levels, and even more fun.

Geometry Wars: Galaxies is a twin stick shooter developed by Kuju Entertainment and published by Sierra Entertainment for the Wii and Nintendo DS platforms.

Geometry Wars Galaxies is an installment of the Geometry Wars series made specifically for the Nintendo Wii and DS.

Geometry Wars: Galaxies was developed by Kuju Entertainment, while the other games were done by Bizarre Creations, making it the first Geometry Wars game not developed internally by Bizarre.

Differences from other games in the series

Instead of being a one continuous stage with progressing difficulty, there are over 60 stages divided by difficulty (galaxies) and stages (planets). Each stage has an unique shape and pattern of enemies and a goal of Bronze, Silver, or Gold medal, achievable with a set number of points. Where as Retro Evolved and Waves (as well as Retro Evolved 2) are not beatable and go on infinitely, Galaxies is beaten when gold medal for every stage is unlocked. Also, there are small collectibles in the form of Geoms, a reward from each defeated enemy that rise the score multiplier.

A major difference between other games in the series is also the addition of the Drone. The Drone, a small helper droid, will perform in various ways depending on the set behavior in the beginning of each stage. It can perform defensive, offensive, or supportive behavior, all of which are upgradeable with the collected Geoms, adding an RPG-like layer to the game. Visual resolution on the Wii is maxed at 480p, the maximum output -- a downgrade from the higher definitions the Xbox 360 and PC are capable of.

There are also a number of multiplayer modes that are unique to Galaxies. While Retro Evolved is also playable in Galaxies, the players have found it to be different and a lot easier than the original. In addition to being based on Retro Evolved and Waves, Galaxies takes inspiration from classic arcade games like Asteroids and Pac-Man.

Differences between DS and Wii versions

The graphics have been considerably downsized for the DS, using a sprite-based system instead of vectors in other versions. There are little to none background and grid animations, and noticeable lag in busier stages, which can make the game easier.

The control is also different due to differences in systems. While Wii allows a choice of motion- or dual-stick control with a classic controller, the DS allows for touch screen control, or a pseudo-dual stick version with the D-pad and face buttons. The latter is arguably less accurate since the face buttons have 4 directions of movement in stead of 8.

The touch screen can be set to display gameplay in which the player directs the ship directly, or an indication of direction while the action stays on top screen. Both versions have an unique galaxy unlockable via WiFi connection from Wii to DS. Both versions have Internet leaderboards, but only the DS version allows for WiFi multiplayer. The mode called Versus is unique to the DS. In Versus mode, one player takes control of the ship, while the other adds enemies to the stage.

Both the Wii and DS versions include a graphically scaled-down version of Geometry Wars: Retro Evolved.

Lambda (Requires Wii and DS versions to connect to unlock) 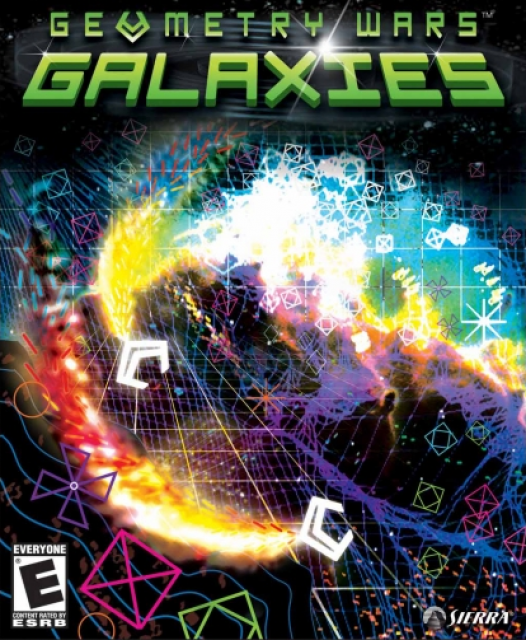