The Warriors is an action adventure 3D brawler that covers and expands the events depicted in the movie of the same name.
PlayStation Portable PlayStation 2

The game plays as a traditional 3-D brawler, and includes grapples, light attacks, strong attacks, reversals/counterattacks, and blocks. Group attacks and "Rage Mode" are part of the gameplay as well. Almost any object can be used as a weapon, or can alternatively be thrown instead.These items range from traditional makeshift weapons to bricks and other similar items, to items more bizarre such as a bong.

While playing as the Warchief, or leader of the Warriors, the player can give one of six commands to his soldiers. Some commands are unavailable in certain missions.

The game can be played entirely in co-op, but only locally. The game also has Rumble Mode which is made up of eight separate multi player modes. The modes featured are:

Armies of the Night

Once the main game is completed, Armies of the Night is unlocked. This small mini-game is essentially a 2D brawler, very similar to Double Dragon (the opening scene is actually a direct parody of Double Dragon's opening scene).

This mode allows players to play the main game as the Baseball Furies. It is unlocked by beating the game 100% on Hardcore Soldier mode.

The Warriors are the primary gang featured in the game, and they reside over their turf in Coney Island. Along with hundreds of other gangs, the Warriors are summoned to send nine delegates to a meeting where Cyrus, leader of the most powerful gang in New York City, the Gramercy Riffs, is expected to give an important speech.

Cleon is the leader of the Warriors, and he is responsible for creating the gang with the help of Vermin after they were betrayed by their former gang, the Destroyers. He has a strong presence and is well-respected by his fellow Warriors.

Swan is second in command among the Warriors. After a certain turn of events, Swan must step up and fulfill the role of Cleon, their fallen leader. He is calm, cool, and brave.

Ajax is the hot-headed muscle of the Warriors. He's always looking for a fight, even with other Warriors if they get in his way.

Vermin is one of the co-founders of the Warriors, along with their leader, Cleon. Vermin is more laid-back than the others, but always loyal.

Cochise is a soft-spoken tough guy. He was initially rejected by the Warriors because he lived in Harlem, which is the turf of a rival gang known as the Boppers. However, he boldly rises to Cleon's challenge and proves his worth.

Fox is the scout of the Warriors. He's a very observant member of the group, and provides the Warriors with valuable information.

Snow is one of the more quiet and reserved members of the Warriors, though he clearly demonstrates that he is a solid fighter.

Cowboy isn't nearly one of the strongest members of the Warriors, but he shows that he's an excellent companion. He's always loyal and will do what he can to help out his comrades.

Rembrandt is the primary tag artist for the Warriors, and he is initiated into the gang during the outset of the game. He may not be as tough as the others, but he always represents for his crew.

Ash is a member of the Warriors made up for the video game. He is not one of the nine delegates present during Cyrus' speech.

Along with the Warriors, there are several other gangs, spanning all of New York. Many of them were featured in the movie, and all have a mission featuring them. Other gangs can also be played in the multiplayer modes.

The Rogues, led by Luther, are a chaotic group, focused on creating mayhem just for fun. They are the main antagonists of the Warriors , due to the fact that Luther killed Cyrus and blamed the Warriors for it. Just like in the movie, the Rogues are confronted by the Warriors at Coney Island. The played must defeat the Rogues and injure Luther. Once beaten, the Riffs show up to finish off the Rogues. During the credits, the player controls the Riffs as they finish the Rogues off.

The most powerful gang in the city, led by Cyrus, are the Riffs. Cyrus plans to unite New York City's many gangs, but is killed by Luther. Luther blames the Warriors' War Chief Cleon, who is killed by the Riffs. The Riffs put a call out to the whole city to bring the Warriors to them, or kill them.

A silent, but intimidating group, who dress in traditional baseball attire and wear face paint. The Furies chase the Warriors around their turf many times in the game. If the game is beaten 100% on the highest difficulty, the Furies are unlocked in the story mode. They can be played in their own difficulty mode and follow the main story of the Warriors.

A small-time gang from Tremont, led by Sully. The Orphans claim they defeated the Warriors, even though they didn't. To rectify this, the Warriors go to the Orphans turf and confront them. The player must destroy Sully's car and take out 40 Orphans to complete the mission.

Operating out of SoHo, the Hi-Hats focus on art more than gang activities. The members wear top hats and mime clothing and are silent much like the Furies. They are led by Chatterbox, a large, stuttering clown.

An all female gang from the Bowery they try to seduce The Warriors before trying to kill them.

A gang from the Bowery whose leader wears roller skates. They are seen wearing overalls over their striped shirts.

A gang from Gun Hill Road, they have shaved heads and travel around in a bus with graffiti tags all over it. The Warriors have to run from their bus to get to the subway.

Another gang from Coney Island that Cleon and Vermin used to be a part of until the leader Virgil got paranoid and tried to set the up to be killed during a drug deal. They are The Warriors main rivals. 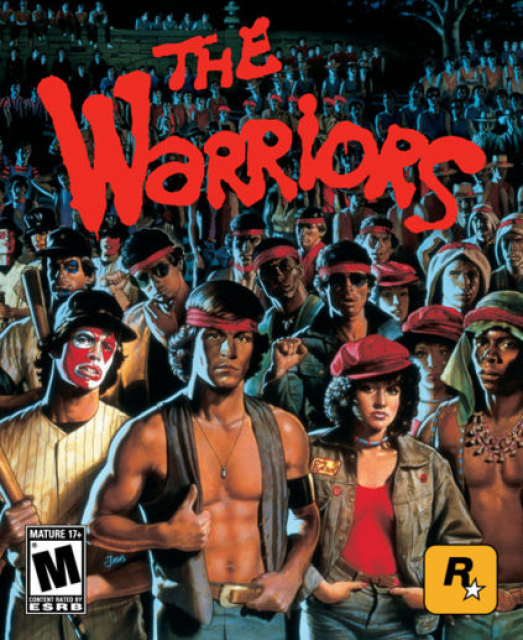