A survival horror title similar to Resident Evil created by Sega for the Sega Saturn. It was never released in the US and was the last Saturn title to be released in Europe.

Inspired by films such as The Abyss, the premise of Deep Fear involves John Mayor, an ex-Navy Seal who is part of the Emergency Rescue Services battling mutants and undead humans on a naval research facility while trying to rescue a doctor from certain death.

The game's unique feature is that each room in the game is hermetically sealed, and most have a limited quantity of air. John will consume air if he stays in these areas, and will consume it a lot faster if he shoots a firearm. Should the oxygen run out in a room John will die. "Air grenades" can be found to replenish a room's air, as can first aid kits which will heal John's health and appear very similar to Resident Evil's first aid sprays.

Deep Fear's shooting takes place in third-person from varying camera angles, due to every screen in the game having a unique fixed position for its camera. 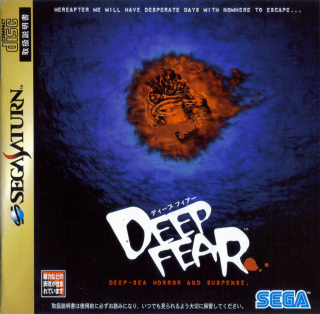