An early role-playing shooter released by Arsys Software for the PC-88, PC-98 and FM-7 computers in 1986 and ported to MS-DOS by Brøderbund. An early RPG-shooter hybrid, it was one of the first computer games with polygonal 3D environments, along with full 360-degree third-person exploration for indoor environments.

Wibarm (stylized as WiBArM in Japanese and WIBARM in English) was developed and released by Arsys Software for the NEC PC-88 & PC-98, FM-7 and Sharp X1 & X68000 computer platforms in Japan, and then ported to MS-DOS for PC's in North America by Brøderbund Software. The game is considered to be ahead of its time in various ways.

Wibarm was an early example of a shooter-RPG hybrid, combining shooter-based combat with RPG elements such as stat building and open-world exploration. The game switches between a 2D side-scrolling view while exploring the outdoor open world to a fully 3D polygonal third-person perspective inside buildings, while bosses are fought in an arena-style 2D shoot 'em up battle.

It was one of the first computer games with polygonal 3D environments, along with (but more advanced than) Carmine that same year. In contrast to first-person RPG's at the time which were restricted to 90-degree movements in four directions, Wibarm's use of 3D polygons allowed full 360-degree movement in the 3D sections of the game, which was a significant leap forward in terms of 3D game design.

The player controls a mech robot that can transform between a mech, plane and car. The game also featured a variety of weapons and equipment as well as an automap, while the player could upgrade equipment and earn experience to raise stats like many RPGs.

In 1988, Arsys Software's Star Cruiser was in many ways a spiritual successor to Wibarm, building on its 3D game design, gameplay mechanics, and open-world exploration.

Wibarm won the following award from a leading Japanese computer publication at the time: 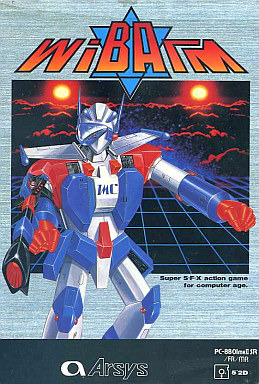