Out of This World

A critically acclaimed "cinematic platformer" in which players control an unassuming young scientist trapped on an alien planet.

Out of This World is action-adventure platforming game designed by Eric Chahi for Delphine Software International and originally published for Amiga and Atari ST home computers in 1991. It depicts the extraterrestrial adventures of Lester Knight Chaykin, a mild-mannered physicist who is teleported to a hostile alien planet as the result of a particle acceleration experiment gone awry. Out of This World is notable for its extensive use of rotoscoped animation to provide fluid movement for the game's characters, both in cutscenes and during gameplay. The game's minimalist presentation was also unique at its initial release: there is no HUD, map, scoring system or lives, and no ammo counter or inventory.

The game has several different titles based on separate release territories. It was originally published as "Another World" in Europe before being localized as "Out of This World" in North America. Additionally, the Japanese version of the game is called "Outer World".

The player takes on the role of Lester Knight Chaykin, a young physicist conducting a particle acceleration experiment in his underground lab on a stormy night. A freak bolt of lightning directly strikes Lester's lab during the experiment, causing a large amount of electrical energy to travel into the acceleration chamber at a critical moment. Lester and his workstation both suddenly disappear from the lab in a flash of light, leaving only an electrically-charged crater behind.

In an instant, Lester finds himself somehow teleported to an alien world. After surveying his new surroundings and evading several dangerous creatures, he is soon captured and rendered unconscious by the sentient inhabitants of the planet: a race of pale, brutish humanoids. Lester later awakens inside a cage along with another alien overlooking a prison mining complex. With the aid of his fellow prisoner (unofficially known as "Buddy"), the pair secure their escape from the prison. However, security forces continue to pursue the fugitives as they flee through a sprawling alien city, forcing Lester and Buddy to split up at certain points. Even if Lester manages to survive this trial-by-fire and evade his former captors, is it possible for him to ever return home?

Out of This World's gameplay employs a 2D side-view perspective, similar to most platformers released at the time. However, movement across the game's world is presented with flip screens as opposed to a more technically-demanding side-scrolling technique. Lester can move left or right, run, jump, crouch, swim, and eventually wield a laser pistol once acquired. In addition to basic projectiles, the gun also allows Lester to fire charged shots and create force shields. Because Lester cannot survive most direct enemy attacks (though the game's laser-wielding aliens will often miss Lester), precision and care are recommended when engaging armed foes. It is even possible for Lester to deplete his laser pistol's energy, requiring players to seek out a recharge station to restore the gun's functionality.

The game includes a password system, allowing players to continue their game from a checkpoint. There are several areas where the player must solve complex puzzles in order to proceed, often involving trial-and-error.

Because there is no comprehensible dialogue in Out of This World, the game's alien setting and its history are entirely left up to the player to infer from their surroundings. From the outset, the region of the world where the game takes place seems to be arid and desolate, and the native flora and fauna encountered by Lester is uniformly brutal and predatory. The planet's sentient life forms appear to condone forced labor and gladiatorial events, as evidenced by the prison mining complex and coliseum areas; these institutions suggest a culture similar to that of the ancient Roman Empire. The city's buildings could also be compared to traditional middle-eastern structures.

Though their culture may seem primitive by human standards, the aliens' technology is far more advanced in some key areas. They seem to possess a greater understanding of energy and how to harness it, evident in the "power nodes" dotted around the city that can instantly recharge Lester's gun. The aliens' laser-based weaponry also takes advantage of their energy mastery, which can stun on the lowest setting or instantly incinerate organic targets, leaving only a charred skeleton behind.

Animation of the principal characters was performed through a process called rotoscoping, whereby real objects were used as models for animation work, lending a life-like and quirky feel to the movement that might seem flat and predictable if animated through simple physics models. Lester's appearance is supposedly based on Eric Chahi, the game's designer. However, because Chahi found it disturbing to view himself as a character in the game, he decided to alter Lester's appearance and depicted him as a redhead instead.

Out of This World was originally released for PC, Amiga, Atari, Macintosh, 3DO, SNES, Genesis and the Sega CD. The Atari and Amiga versions were developed first. They are relatively shorter compared to later versions, and have a higher difficulty level due to more precise timing required of the player. The PC version was the first to introduce a whole new level in the middle to latter third of the game to help lengthen the game and strengthen the narrative.

Further obstacles were added for the Genesis and SNES console ports, as Interplay purportedly wanted players to get as much gameplay as possible for their dollar. Nintendo also had demands about certain scenes which were considered to be inappropriate for minors (which amounted to a few pixels worth of deletions during a bathhouse scene; as well as changing reddish ichor, which might be interpreted as blood, to green).

The Sega CD version of the game included a game set in the same world, dubbed Out of this World 2: Heart of the Alien, which took place from the point of view of the aliens. Eric Chahi has stated, however, that this in-house Interplay project suffers in terms of animation quality and its value as a game, as he was not involved in the project.

Eric Chahi has stated that the problem with some of the early enhanced versions was that the backgrounds were a lot easier to improve than the characters themselves. In order to enhance the characters, new rotoscoping or detailed, frame-by-frame enhancement of the animations would have to be done, while the backdrops could be repainted with relative ease. Doing the latter without the former, though, would result in the characters in the foreground looking flat. For the 3DO version, Chahi says, this is especially apparent.

The enhancement of the animations themselves could probably not be done because processors of the time could not handle so many frames of animation being very detailed, although currently such restrictions are negligible.

In addition to the listed versions, there were also unofficial ports to both the GBA and GamePark 32 systems.

Despite potential interest in a sequel, Chahi himself has stated that he would prefer the story of Out of This World to have no official continuation. He maintains that preserving the ambiguous ending is important to reinforce the game's sense of mystery:

"I think the story is complete. It has a lot of mystery, so doing a sequel would be very tricky. It could break the magic it has."

A sequel to Out of this World was developed for the Sega CD in 1994 called Heart of the Alien, which starred Buddy as the main protagonist instead of Lester. However, Chahi was not involved with this sequel's development and has dismissed the events of Heart of the Alien as non-canonical in the context of the original game's story.

A higher-resolution version of Out of This World is available from creator Eric Chahi on his website. This version has more detailed backgrounds, multiple graphics modes, additional save points and features compatibility with Windows XP and Vista.

The 15th Anniversary Edition is also available from GOG.com and comes with a selection of extra content, including:

In 2011, in commemoration of its 20th anniversary, Out of This World was made available for the iOS (iPhone and iPad) and later Android. The game also arrived on Steam for the first time in 2013. These versions were created by DotEmu and distributed by Bulky Pix. 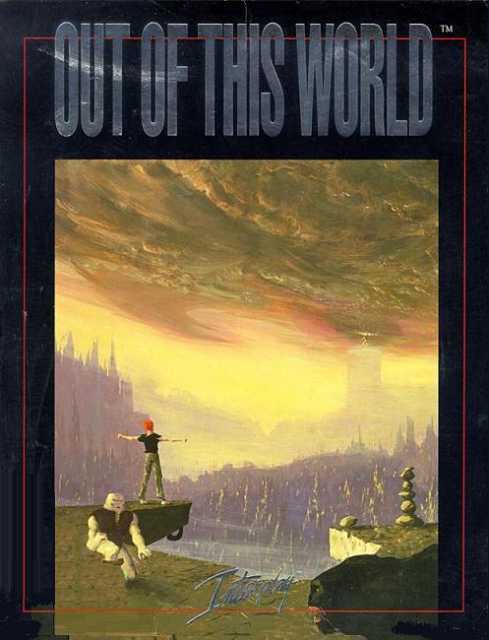