A Japanese role-playing game originally released for the Super Famicom in 1993. It follows a trilogy of Aretha RPGs for the Game Boy with a new main character and story.

Aretha (sometimes Aretha: The Super Famicom to distinguish it from the original 1990 Aretha for the Game Boy) is a role-playing game developed by Japan Art Media and published by Yanoman Corporation for the Super Nintendo platform. The player assumes the role of Ariel, a trainee wizard who gets involved with a quest of global importance. The game is a standard turn-based Japanese role-playing game, using Dragon Quest/Phantasy Star's first-person perspective when fighting monsters.

The game is erroneously considered a remake or port of the original 1990 Aretha game for the Game Boy. In fact, the game continues after the trilogy of Aretha Game Boy games and is the fourth game in the chronology.

Aretha was followed by two sequels: Aretha II: Ariel no Fushigi na Tabi and Rejoice: Aretha Oukoku no Kanata for Super Famicom. The second continues the adventures of Ariel, while the third moves onto a new group of heroes. A translation patch was released in 2018 by Dynamic-Designs. 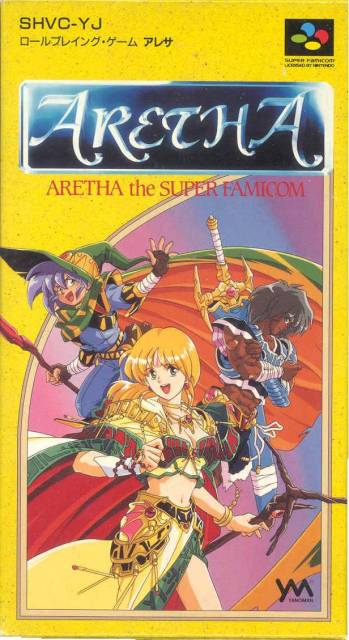