A falling-block puzzle game, designed by the man behind Tetris, that involve stacking piles and piles of hats.

Hatris is a falling-block tile-matching puzzle game developed and published by Bullet-Proof Software for the Family Computer in Japan in 1990.

Designed by Alexey Pajhitnov and Vladimir Pokhilko (the former previously known for Tetris, Welltris, and Faces) from the company ParaGraph, Hatris has players managing six stacks of hats by controlling new sets of hats falling from the top of the screen in pairs (swapping them horizontally using a button).

The objective is to form vertical stacks of five-or-more consecutive hats of the same type, of which there are six in total, and remove as much of them from the board as possible before a stack reaches the upward end line. Unique to this game is how pieces are stacked according to their height and brim size, with the bottom hat being partially obstructed by the top hat. Some hats are tall, but have a very short brims (such as top hats), while some are short but have very large brims (such as crowns).

The game also received ports in 1990-1991 for the arcade, 8000- and 9000-series Sharp Wizard organizers, the PC Engine, the Game Boy, and the NEC PC-9801. The arcade version was ported by Video System, while the Sharp Wizard and PC Engine ports were handled by Micro Cabin. The arcade, Sharp Wizard, and Game Boy ports were also released overseas. An enhanced version of the Famicom version was released in 1992 for the Nintendo Entertainment System overseas.

Each of the ports have their own unique gameplay changes, such as changing each hat size and score, changing the size of the "end line", modifying the "Sale" system (with the NES version replacing them with the "Helper" system), and adding special "Fire" pieces (which burn a stack of same-type hats).

In some versions of the game super deformed avatars of Pajhitnov and Pokhilko appear in the game as characters who assist the player in removing hats and rearranging stacks of hats. 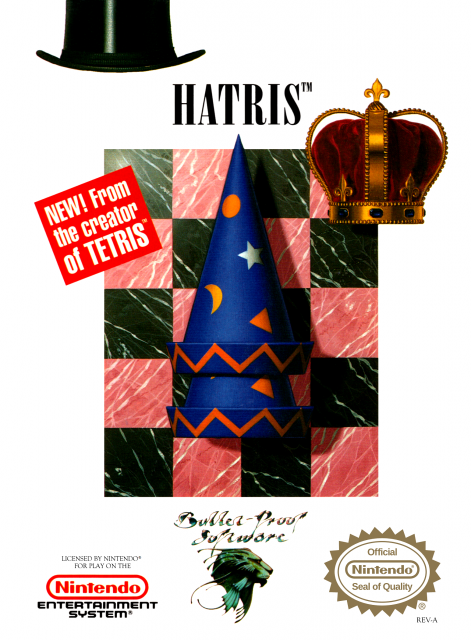