Red Alert 2 is the continuation of the Red Alert series and takes place during the surprise Soviet invasion of the United States.

The style of the game is a comical take on war. The cutscenes are humorous in their cheesiness--which Westwood says was done on purpose in an interview on Command & Conquer: The First Decade. Even during missions the Lieutenant Eva or Zofia will buzz in with something humorous to say from time to time (seen especially in a mission where the player is protecting Einstein's laboratory. Einstein constantly buzzes in shouting at the player where the enemies are located as Lieutenant Eva calmly asks Einstein to not touch those buttons).

Originally, the box art for Red Alert 2 depicted the World Trade Center burning. After the September 11, 2001 attacks, the box art was promptly reprinted to something more suitable.

Command & Conquer: Red Alert 2's soundtrack is composed by Frank Klepacki. These are the songs in the game.

Albert Einstein travels back in time using a device called the Chronosphere in an attempt to aid humanity and rid the world of Adolf Hitler. Unfortunately, in his good intentions, a new power arises: the Soviets. After Stalin is defeated in the original game, Red Alert, a new Russian ruler is put in power by the Allies. Premier Romanov is the peaceful new leader. All is well again, or so it seems. Even though there are two separate storylines, the Allied story is considered canon because of the continuity in future games.

In the Allied story, the player controls a soldier--known only as the Commander--who must defend America from the attack. After America is caught off-guard with a Soviet all-out attack, President Dugan orders retaliation with nuclear missiles, but Yuri stops the resistance using his mind control technology, causing the warheads to explode in the silo. Dugan then orders an emergency response team headed by General Ben Carville and the Commander.

After liberating several key military bases in the western US, it is revealed that the President and several other key officials, including General Carville, have been mind-controlled by Yuri's Psychic Beacon. Lieutenant Eva is one of the people who isn't under Soviet control yet, so she and the Commander manage to swiftly destroy the Psychic Beacon and free the officials under control of Yuri. Unexpectedly, the Soviets respond to this resistance by completely obliterating Chicago with a nuclear warhead.

Desperate, the US turns to their allies for help. France, Germany, and the United Kingdom all agree to help on one condition; the nuclear warheads in Poland must be destroyed. After destroying it--thanks to the Commander--the Allied is able to recapture many of the bases lost beforehand.

In an effort to end the war, Albert Einstein has his Chronosphere built and a strike team made ready for teleportation to Moscow. The plan works, and Premier Romanov is captured. The war is over.

After capturing these cities, America gains the allies France and Germany. They send soldiers over into Russia, but leave their homeland defenseless. Taking advantage of this, a strike against Paris is ordered. Along with many other victories in Europe, the Americans are left without allies.

While all of this is happening, Yuri is slowly taking control of Premier Romanov's mind. Because of this, Yuri is promoted to the Premier's top military adviser. General Vladimir sees what Yuri is doing and flees to Washington, D.C. to help the Americans. However, two strike teams manage to recapture Vladimir and the U.S. President Dugan.

It is uncovered that the U.S. is developing the Weather Control Device in the Virgin Islands. A naval attack is ordered on the islands by Yuri, and the device is destroyed before it can be activated.

After the attack, Yuri is found to be a traitor and a civil war engages. A battle ensues in Moscow, where Yuri is housing his base. After destroying the base, Yuri is believed to die. Then, the Soviets capture the very last remaining Allied base in Alaska. The Soviets are victorious.

The President of the United States in Red Alert 2 is Michael Dugan. Played by Ray Wise, Dugan tries to negotiate peace with the Soviets. He appears in many of the mission briefings, and even in one mission where he must be rescued (as he was mind-controlled in Washington, D.C.). In the Soviet campaign, he appears in one mission in San Antonio, Texas, where he must be mind-controlled.

Ben Carville is a Major General in the U.S. Army. He was born and raised in Texas, as evidenced by his thick accent. He is a veteran from previous wars, including one with the Soviets (he was in the game Red Alert: Retaliation). In Red Alert 2 he is killed by the suicide bombing of a Crazy Ivan, but later in Yuri's Revenge is revived (due to a time travel twist). Barry Corbin plays Ben Carville.

Eva Lee is the American adviser who mans most of the intelligence equipment, and briefs the player before most missions. During missions, she provides assistance, tips, and sometimes arranges for things to happen (units showing up, bases knowing about the Commander's arrival, etc). Despite the fact that she is merely an intelligence adviser, she is one of the most prominent characters in the game (she even shows a romantic interest in the player at the end of the Allied campaign). She is played by Athena Massey.

Tanya is a commando for the Americans in Red Alert 2. She is played by Kari Wührer. Tanya is a straightforward, disrespectful, but incredibly skilled person. She appears in many of the Allied missions, sometimes during mission cutscenes, but often as a special unit. Despite her original disrespect for leaders (such as Ben Carville, the Commander, and the President), as the game goes on she gradually begins to respect these people more and more. At the end, she even begins to take a romantic interest in the player.

Albert Einstein is the cause of many of the events in Red Alert 2, and its predecessors. In Command & Conquer: Red Alert, he found a way to go back in time and erased Adolf Hitler from existance. In Red Alert 2, he has develoepd many new technologies, such as Prism technology (which utilizes light power to an extent that it can destroy units and buildings), Chronosphere (a teleportation device), a Weather Control Device, and Mirage Tanks (which can appear to be trees to the opponent).

Alexander Romanov is the Premier of the Soviet Union, the leader after the death of Joseph Stalin in Red Alert. Romanov is rather insane, but some of this eccentricity is due to his adviser being Yuri. Romanov has a small turtle named Sam, after Uncle Sam of the United States. Although he is portrayed as ruthless, Romanov is more of a comic relief character. In the Soviet campaign, Yuri gradually takes control of Romanov by slowly deteriorating his mental state. Alexander Romanov is played by Nicholas Worth.

Zofia is the Russian intelligence adviser. She is technically the Soviet counterpart of Lieutenant Eva Lee. She differs from Eva in that she does not play a large role other than a military adviser. She is loyal and acclaimed in the Soviet Union; she especially displays this loyalty towards the player and Romanov. She is played by Aleksandra Kaniak.

Yuri is the adviser of Alexander Romanov. He is more of an antagonist than Romanov, as he is much more evil and intelligent. He is capable of mind-control, making him incredibly dangerous. He displays this skill quite a lot throughout the single player campaign (and is available as a unit for the Soviet faction). He is one of the most serious characters in an otherwise comical game. Yuri is played by Udo Kier.

The game is a traditional real-time strategy game. The player starts out with several units and a base. The goal is to quickly build up the base and eliminate any enemies in the area. In the campaign, there are several missions that differ from that style, however. The game features two different campaigns; a Soviet campaign in which the player takes control of Comrade General in a mission to conquer the world, and the Allied campaign in which the player takes control of the Commander who must help defeat the Soviet uprising.

Nearly everything in the game is centered around the collection of Ore. Ore can be collected in several ways. First and most common is using Ore Miners to collect the ore, which they do automatically. Second, an Oil Drill (one of the neutral buildings) can be captured by an Engineer and used to gather ore. Third, a Spy can be sent into a rival Ore Refinery and money will be given to the player.

Neutral buildings have a variety of effects. From the aforementioned Oil Drill, to the Hospital (which automatically heals infantry units), neutral buildings are always helpful no matter what the effect. If captured, they can be captured by other players, however, so they should be guarded.

Red Alert 2 also features a Crate system. When a unit collects a crate it does a variety of different things to benefit the player. For example, it may give the player a unit unique to a certain country, or the ability to see the entire map. Using crates, the player could create a Soviet base and an Allied base as well.

In the game there is also a "promotion" feature that gives a single unit new abilities when it defeats enough enemy units. A unit can be promoted twice: once to Veteran and twice to Elite. Promotion gains the unit many things such as upgraded speed, strength, defense, and rapid firepower. Using a Spy, the player can make it so that units automatically gain promotion as well.

Superweapons are another feature in Red Alert 2. Normally expensive and power-draining, these powerful "secret weapons" serve as a weapon that can considerably turn the tables. After built, they take an amount of time (normally five minutes or so) until ready to be launched. There are two types of Superweapons as well; the first and lesser-powerful serves as merely an aiding "weapon" that boosts a portion of units. The Soviets have the Iron Curtain, which makes a small group of units temporarily invincible while the Allied has the Chronosphere, which can teleport a small group of units anywhere on the map. The second and much more devastating serves as a large hindrance for the player struck by it. The Soviets have a Nuclear Missile, which can destroy large portions of a base, while the Allied side has the Weather Control Device, which strikes the enemies with lightning.

There is a multiplayer mode in the game: both LAN and online. Although nowadays the server is shut off, there are still fan-hosted servers that can be played on today. Multiplayer is basically a Skirmish mode with real players, although there are several game modes that one can play. 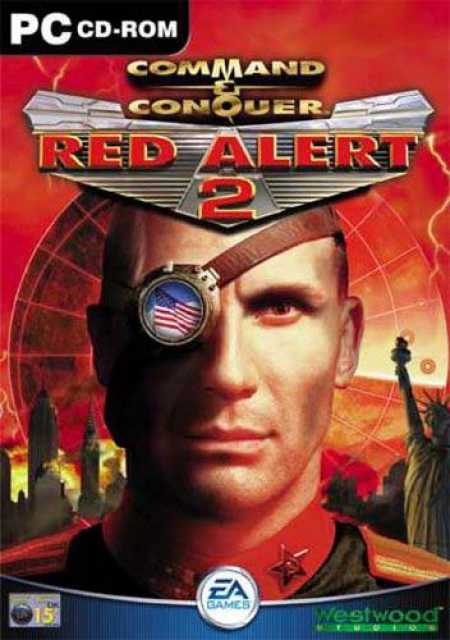