Digimon Rumble Arena is a platform based fighting game. Players take on the role of a Digimon and battle against comptuers or friends in one on one Digimon battles to score as many points as possible and to win as many matches as possible.

Digimon Rumble Arena features three modes of play; a single player mode where the player battles his or her way through a variety of Digimon before facing the games boss, Reapermon to unlock new characters and a new location.  Through this single player mode there are a couple of mini-games that the player can attempt to beat the computer at to gain more points to his overall score.

There is also a battle mode where the player can battle against either another player or against the computer in one on one Digimon battles where either a random battle site can be chosen or a random site can be done by flicking through the sites quickly.  Again, the aim is to get as many points as possible and to win as many rounds of battle as possible.

Finally there's the mini-games that the player can play, again, against another player or against the computer.  These mini-games are rather simple and feature button bashing and releasing a button at a critical point to gain as many points as possible.

Each Digimon has their own unique moves such as Agumon's Pepper Breath or Gabumon's Blue Blaster, and each Digimon, besides their specialty attacks, has a jumping attack, a moving attack and a grabbing attack that they can perform.  On most battle sites there are also items that players can pick up to gain or lose advantages such as health renewal items like bread and chocolate, power up items and dark rings that intefer with the players movements.

Digimon Rumble Arena starts off with a number of popular characters from the first three series; Agumon, Gabumon, Veemon, Gatomon, Patamon, Renamon, Guilmon, Terriermon and Wormmon.  After completing the single player mode with one of these characters you unlock their Digivolved form which then can be played in any of the playable modes.  There are also other Digimon available to be unlocked, such as Impmon and his Digivolved form, Reapermon, Imperialdramon (paladin mode), Blackwargreymon and Omnimon.  Generally, Digivolution Digimon are Mega Level Digimon, with the exception of Wormmon's Digivolution, Stingmon, who is only a Champion Level Digimon. 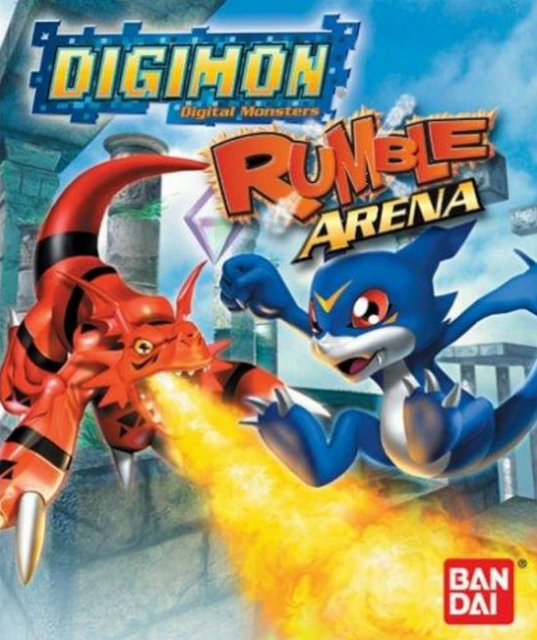