Dungeon Master launched a genre into the mainstream - the real-time dungeon RPG. An elaborate mix of combat and puzzles, the game was incredibly popular the world over. The player took control of a party of up to four adventurers on a quest to retrieve the firestaff and destroy Lord Chaos.

Dungeon Master is a first person dungeon adventure from developer FTL (Faster than Light). The quest is to descend through 14 levels of the eponymous Dungeon to retrieve the Fire Staff - the only weapon capable of stopping the evil Lord Chaos.

Dungeon Master was originally released on the Atari ST home computer in 1987. It was later ported to various other home computers of the era, such as the Amiga, the PC, the FM Towns, the Sharp X68000 and the Apple-II. It would eventually see console ports on the Super Nintendo and TurboGrafx-CD as well. Dungeon Master was eventually followed up with a far more challenging expansion pack, Chaos Strikes Back, as well as a sequel in 1994: Dungeon Master II: The Legend of Skullkeep.

Dungeon Master was a trailblazing RPG in that it created the first truly real-time dungeon crawler. Previous games of the genre, such as Wizardry and Ultima, focused on long turn-based battles and thus were a little too ponderous for many. Dungeon Master's many boons to accessibility made it a huge hit.

The quest begins in the Hall of Champions. Portraits of fallen warriors line the hallways and as the player views these they are able to resurrect them to join the party. Champions must be selected carefully to complement each other as each have different skills and equipment that will be needed on the journey.

The game featured a sophisticated experience system for the time in which it was made. Each character is able to progress in four classes: Fighter, Ninja, Priest and Wizard. Advancement in each is dependent on using the skills relevant to the profession. For example, a character put at the front of the party that attacks enemies with melee weapons will advance in the fighter class. Ninja classes are raised by throwing items, Priest classes are raised by creating potions through magic and Wizard classes are raised by casting offensive spells. At any point the player can simply choose to spam an activity over and over to raise their levels, as with each level raised in any class came additional health, mana and other stats. This helped mitigate the game's occasional difficulty spikes, such as the tough worm monsters on the fourth floor.

As well as the experience system Dungeon Master gave each character a number of additional attributes that needed to be carefully managed throughout the quest. Characters would need food, drink and rest. Food can be occasionally found after defeating monsters, water supplies can be replenished in the occasional fountain and it is important to remember that sleeping wherever enemies were close is always a mistake.

The magic system in Dungeon Master includes various recipes for spells and potions, which requires casting the correct magical runes in order. If combined correctly a spell would result. If not, nothing would occur, but the player would still lose mana from the attempt. Basic spells are provided via scrolls but many are left to the player's experimentation, with knowledge of what each individual rune symbolizes as clues. 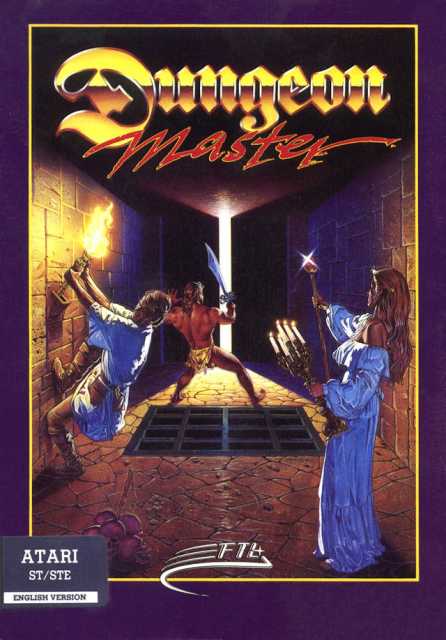