Puyo Puyo is a competitive puzzle game. Pieces drop from above a la Tetris and players must connect four contiguous pieces to for them to pop.

Puyo Puyo is an arcade puzzle game featuring characters from Compile's Madou Monogatari RPG franchise. It is often referred to as first game of the Puyo Puyo series, despite the fact that an earlier Puyo Puyo title exists. The game was developed by Compile and published by Sega on their Mega Drive-based System C2 hardware. As opposed to its predecessor, the arcade Puyo Puyo places a heavy emphasis on competitive play; the game's single player mode consist of a 13-match gauntlet against various Madou Monogatari enemies, while the multiplayer mode pits two players against each other in a 2-out-of-3 Puyo match.

The arcade version was ported to a variety of platforms. Three of these home ports would be extensively modified for worldwide release: the Genesis and Game Gear ports became Dr. Robotnik's Mean Bean Machine, while the SNES port (Super Puyo Puyo) became Kirby's Avalanche.

Puyo Puyo is a puzzle game with two players, although one may be controlled by the computer. Pieces come down in pairs, sometimes of different colors. When players connect at least four pieces, they "pop" those pieces, making them disappear. Two pieces are "connected" when they touch horizontally or vertically but not diagonally. Pieces that were above the popped pieces then fall down to fill the void created. The falling pieces can then create a connection of four similar colored pieces, thus causing a chain.

When the player successfully pops pieces, they send "garbage" pieces to the opposing player, falling from random columns. The more pieces in a pop and the longer the chain, the more pieces are sent. These garbage pieces are uncolored and do not chain but if they are adjacent (again, vertically or horizontally but not diagonally) to a popped colored piece, then they also disappear.

The player that hits the top of the well loses.

This is basically multiplayer mode. In it two players play against each other. By out-chaining the other player, the player fills out their grid and that leads to victory.

An English-translated version of the arcade release was released in Europe, but the authenticity of this version is disputed; it is not known whether the game was officially localized by Compile/Sega or if it is an unlicensed bootleg. In addition to adding English voice work (and removing the wings from Harpy's sprites), this version changes almost all of the character names. One specific name change, Satan to "Dark Prince," is also used in the English versions of the Neo Geo Pocket Color Puyo Pop and GBA Puyo Pop.

Though the Game Gear port was not released outside of Japan, playing the game in a non-Japanese system will reveal an English version named "Puzlow Kids." Notably, the ending text of Puzlow Kids's scenario mode is identical to the script of the English arcade release; this includes a mention of "the Dark Prince." However, Puyo were renamed to "P-Kids" in this version, while they are known as "PuyoPuyo" in the English arcade game.

Sega and Nintendo published their own localized versions of Puyo Puyo, though they both stripped the Madou Madogatari characters from the game and used their well-known franchises instead. Sega used characters from The Adventures of Sonic the Hedgehog cartoon to create Dr. Robotnik's Mean Bean Machine, while Nintendo and HAL Laboratory used Kirby characters to make Kirby's Avalanche. Mean Bean Machine drops the difficulty level system (and the beginner characters with it), but includes a password feature; the game also reuses several Puyo Puyo BGM tracks, such as Satan's theme becoming the Verses Mode and Danger themes. Kirby's Avalanche does not make any gameplay changes but replaces every song except the Danger theme with Kirby-series BGM. 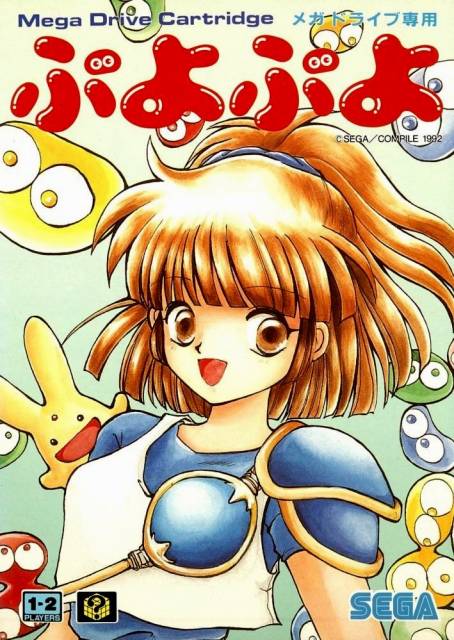