The first in the Heracles no Eikou series of Ancient Greek-themed JRPGs created for the Famicom.

One of the earliest JRPGs, following the success of Dragon Quest I & II, Heracles no Eikou: Toujin Makyou Den (lit: "Glory of Heracles: Labors of the Divine Hero") has the player control the Ancient Greek demigod of Heracles (or Hercules, as he's known in Roman myth) as he assists the Goddess of Love Aphrodite while completing his legendary twelve Herculean tasks.

The game is modelled on Dragon Quest and plays similarly to that and other 8-bit JRPGs: Heracles can walk around town interacting with hint-providing NPCs, purchase equipment and items at stores and save the game. Battles are turn-based and continue until one side has lost all their HP.

Heracles no Eikou has a few minor improvements to the Dragon Quest formula, such as giving shopkeepers portraits or changing Heracles' sprite to reflect armor changes. 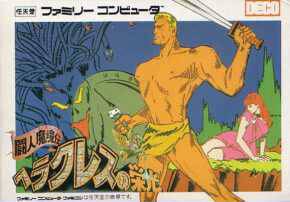