Powerful new alliances are formed as the Orcish invaders and Human kingdom of Lordaeron square off for land, sea, and air superiority.

Warcraft II: Tides of Darkness is a medieval-fantasy real-time strategy game developed and published by Blizzard for the PC (running MS-DOS) and Macintosh on December 9, 1995.

Set six years after the events of Warcraft: Orcs & Humans, where the Orcish invaders have conquered the kingdom of Azeroth and driven the Human survivors out through the Great Sea, the game pits the Orcs (now allied with trolls, ogres, and goblins) against the Human kingdom of Lordaeron (now allied with the high elves of Quel'thalas and the dwarves and gnomes of Khaz Modan).

The game (combined with the expansion) was later ported to the PlayStation and Saturn consoles and released by Electronic Arts on August 31, 1997 as Warcraft II: The Dark Saga. The PC version was also re-released (combined with the expansion) on September 30, 1999 as Warcraft II: Battle.net Edition, adding native Windows capability, online multiplayer via Blizzard's Battle.net service, and a variety of new gameplay enhancements (some of which borrowed from StarCraft). The game later received a sequel, Warcraft III: Reign of Chaos.

The Horde and Alliance units were near replicas of each other, sharing nearly all stats. This did not hold true for late game caster units, who differed due to the spells available to them. The two ranged units also differed, with the Alliance rangers receiving a damage bonus and the Horde axe throwers receiving slow health regeneration.

Ranged unit. Heavily upgraded and in large numbers these can prove to be a valuable asset. However, they will be easily torn to pieces in melee by the later game units. Produced at the barracks.

Upgraded version of the Archer/Axe Thrower. Cool war paint. Produced at the barracks.

Late game melee unit and the core of most armies. Good at everything. Produced at the barracks.

Upgraded version of the Knight. Produced at the barracks.

Upgraded version of the Ogre. Produced at the barracks.

Alliance spellcaster unit and their most important unit. Produced at Mage Tower.

Horde spellcaster unit. Produced at the Temple of the Damned.

Resource gathering unit that is able to build oil platforms to collect the oil that enables the building of more advanced ships. Produced at the shipyard.

Holds up to six units. Can be turned invisible by Mages. 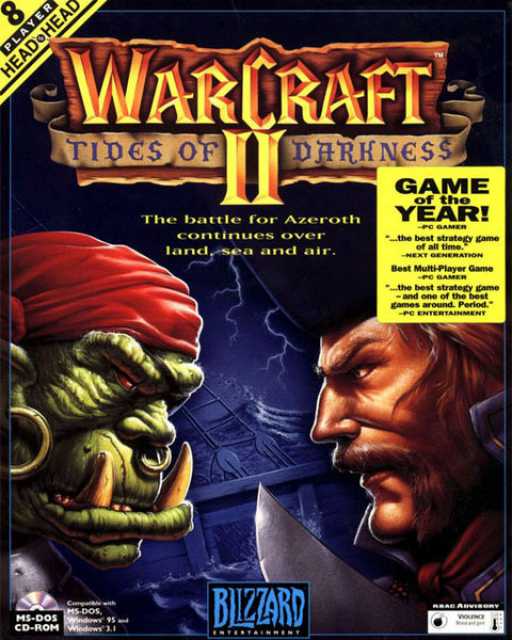