A puzzle game exclusive to the Atari Jaguar. The player must juggling spinning tiles around into their right positions by flipping the right colored tiles.

Flip Out! is a puzzle game for the Atari Jaguar. It was developed by licensed game veterans Gorilla Systems Corporation and was the first video game they ever produced.

The game is set on the Cheese Planet and the Planet Earth and the player must assist a group of aliens by moving tiles into their right positions after flipping them into the air. Later levels make slight tweaks to the formula.

The general mechanics of Flip Out! is to launch a tile into the air and quickly send a second one up: the first replaces the gap left by the second after it lands. By doing this to every tile so it lands in a square that is the same color, the player completes the stage and moves onto the next. If a tile is flipped up and lands before another tile is sent up into the air, it'll smash on the ground and the player will have to restart.

Later stages have the player flipping items other than tiles, but the core juggling mechanic remains. 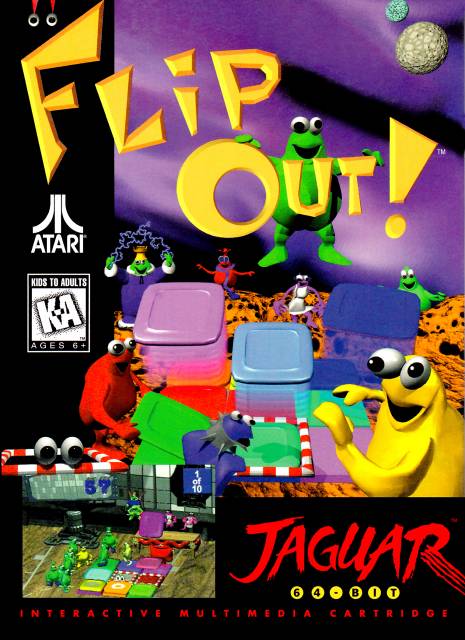