When Pandora's Box is accidentally opened, first person shooting commences in an array of cities, sewers and subways as you fend off destructive mythical creatures.
Xbox 360 PlayStation 3

Legendary was a game developed by Spark Unlimited and published by Gamecock Media Group. Legendary was released on November 4th, 2008 (on PS3 and Xbox 360) and November 18th, 2008 (PC). The game includes a single-player campaign and multiplayer.

Legendary follows the story of an art thief named Charles Deckard. The game begins in New York's Museum of Modern Art, where Deckard is tricked into opening Pandora's Box during a routine art heist. Once Deckard opens the box, his left hand is burned with a Signet, an insignia of Pandora. In addition to gaining the insignia of Pandora, Deckard also releases mythical creatures upon the earth. Such creatures include: griffons, golems, werewolves, fire drakes, and minotaurs. Along the way, Deckard discovers the Black Order, a group sent to destroy Deckard and contain the monsters released from Pandora's box. Eventually, the player discovers that the Black Order isn't actually trying to contain the mythical monsters, rather, they plan to capture the monsters so they can be used as super soldiers for its developing army.

Aside from the normal conventions seen in standard FPS games, Legendary gives the player the ability to siphon Animus Energy through the Pandora Signet when an enemy is killed. Once siphoned, the souls become energy that can be used to replenish health or to perform a force-push that can knock down impending barricades or stun enemies. Enemies include many different mythical creatures, including: "normal" and "alpha" werewolves, minotaurs, griffons, golems, a kraken, fire drakes, echidnas, Nari (or Narfi), the God of Chaos Loki, bloodticks, and dragons.

These fire-breathing, heavily armored lizards can usually be found underground, although some do venture out into the sunlight in search of fresh meat. They can spit large fireballs at foes, so even if you are a good distance away, they can still get you. If you get too near, the drake will send out a fire pulse from its body, pushing you back. Their armor can stand up to large barrages of bullets, so your best bet would probably be either the shotgun or, of all things, the fire ax. Like mythological salamanders, firedrakes spawn in fire pits, so you will want to use water to take those out. In contact with water, even the hardiest firedrake will harden and die.

Despite the myths, werewolves are not transformed humans, but a killer canine-ape hybrid. They can't turn you into one of them, so they'll just settle for ripping your head off. Cursed by Limos, the Greek god of hunger, the lesser Limos werewolves have to eat constantly, or risk eating themselves from the inside out. They are extremely agile, so rapid-fire guns are your best bet. Werewolves can regenerate from most damage, meaning you have to decapitate them to prevent them from coming back. If one falls with its head still intact, rush in with the fire axe to stop it from getting back up.

Recognized by their thick coat of fur, Alpha werewolves are much more hardy than their lesser cousins. The same rules apply, but Alphas can take a lot more damage. Occasionally, Alpha werewolves will jump on you and attempt to maul you. Follow the on-screen prompts to save your life and turn the tables, resulting in a one-hit K.O.! Oh, one more thing: Alphas most often attack in packs with their weaker cousins, so stay on your toes.

These flying imps resemble pixies but are equipped with razor-sharp teeth and talons. Keep on the alert for their trademark laughter, sounding like hundreds of little girls. Nari mainly flitters around in flocks, becoming intangible and invulnerable. When they want to attack you, they turn solid and float in to claw at your face. In those few seconds, use a rapid-fire weapon to shoot them out of the air. Nari are very cunning and very, very dangerous. They can possess inanimate objects and turn them against you, leading to all kinds of mischief and slaughter.

These towering bull-men are not to be taken lightly. They are immensely strong, fast, and carry huge clubs. They are nearly bullet-proof from the front, so your only chance is to evade them and blast away at their back with heavy-duty weapons like the shotgun. Even then, it still takes a lot to bring them down. Good luck fighting more than one at the same time...

You will want to avoid these as much as possible. These flying predators are as large as buses and more powerful than minotaurs. Fortunately, griffons tend to keep away from you, flying around in the sky (and taking down your air support). However, on occasion, one will swoop in close enough to decide that you look tasty, at which point you have no choice but to do battle. Keep as far away from the slashing beak as possible, and proceed to fill it with as many kinds of lead as you can find. It's an entirely different story when you have the rocket launcher, however. One well placed rocket should ensure that the bird never flies again.

No, these are not the spiky monotremes from Australia. They're not the lost members of Knuckle's race either. These tentacled monsters are based off of the deadly serpent-woman from Greek mythology, and are every bit as slimy and bloodthirsty as their mother. You never get to see the full monster, but the tentacles will eagerly snatch passerby and pull them to a grisly death. If you should find yourself in an echidna's grasp, quickly blast it with your gun to make it release you. Since these creatures actually grab you, you will want to avoid using fire to attack them. Although echidnas never venture out of water, staying dry doesn't always mean you are safe...

In Japanese mythology, the ancient spider-demon Tsuchigumo was killed by the hero Raiko. From the demon's corpse, however, thousands of red spiders poured out into the world. Nicknamed "Blood Spiders", these little devils come in colonies produced by a vile-looking queen. The queen will constantly pump out spiders, which will make a beeline (spiderline?) straight for you, exploding when they reach you. The only way to stop the swarm is to take out the queen. Even then, the queen will release the rest of her offspring upon her death, so don't let up until there's not an insect in sight.

In Jewish folklore, golems are hulking brutes made from clay, used as household servants. This golem, on the other hand, is made from building rubble and smashed cars, and is getting his "Godzilla" on in Times Square. Bullets and even missiles are a joke against this fella, since he ismade out of BUILDINGS. However, the only thing keeping the colossus together is a magnetic field sucking in debris. Your one chance on stopping this guy is to use E.M.P. devices to knock out the field, and even that is FAR from easy.

While the situation on land is bad, it's even worse in the oceans. Pandora's Box has awoken nameless leviathans from their ancient slumber. One of the worst is the Scandinavian sea monster, the Kraken. Big Boy here decides to get in on the action too, heading to London. Soon enough, the Kraken hauls itself out of the Thames and rips down Big Ben! Like the golem, the kraken requires heavy-duty weapons to take down, the difference being that the kraken is still flesh and blood. Use the rocket launcher to shoot its tentacles. When the kraken roars in pain, shoot another rocket down the sea monster's throat. Easy? You wish.

Legendary has an online multiplayer component.

Legendary received mostly negative reviews, including a 2.5 (Xbox version) and a 2.3 (PS3) from IGN, although OXM and Gameplanet each gave it a 7.5. 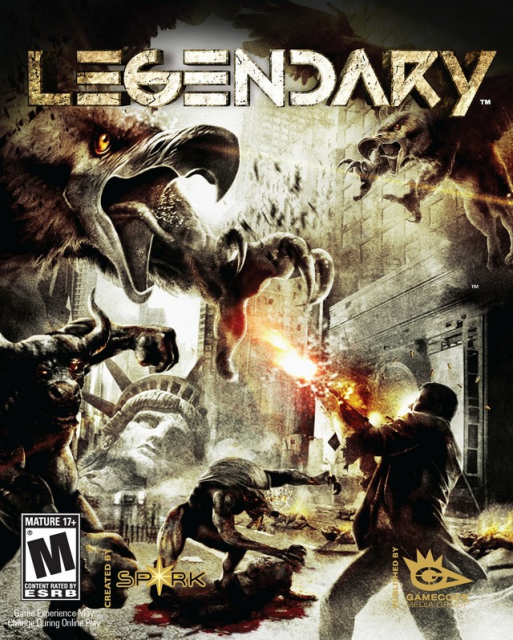