Piyotama is a puzzle game from SCEJ released exclusively on the PlayStation Network (PSN). It cost $2.99 at launch for the PS3 and weighs in at just over 100 MB. The PSP version cost $4.99 at 33 MB.

The game carries on the tradition of puzzle games such as Tetris, Columns, and the Puzzle Fightergames in that it features objects (in this case, piyotamas) falling from the top of the screen into a bin where they stack up. Depending on the mode, the game ends either when time runs out or when the piyotamas completely fill the bin.

Mama Piyo sits atop the bin and lays a couple of piyotamas every couple seconds, which fall into the bin and begin to fill it up.

The piyotamas come in four colors: Red, Purple, Green and Orange. When four or more piyotamas are lined up horizontally or diagonally (there are no verticle lines), they begin to hatch. After a few seconds, they will explode and the Piyopiyo will hatch and fly away. The piyotama stacked up above the ones that just hatched will fall down to fill in where they used to be.

Gameplay consists of bumping three piyotama out the left or right side of the bin and being able to move them vertically. Players try to line up at least four piyotama of the same color so they start to hatch. After they start to hatch, they will glow and can be moved. The more piyotama that hatch at once, the higher the combo points obtained when they hatch. Every time a new set of piyotama starts to glow, the countdown to their hatching starts over, so the player has more time to set up another combo.

Piyo Coop is a single-player timed match. Try to get as many points as possible in the time allotted.

Free-Range is a single-player untimed match. The game goes on until the bin is filled up to the top and overflows.

In this mode, two players compete head-to-head to outscore and outlast their opponent.

In addition to the regular piyotama, there are different special piyotamas that will occassionally appear.

Glowing piyotama will cause all of the piyotama of that color in the bin to begin to hatch once they are lined up in a line of four or more.

prevent the player from being able to move the piyotama outside the bin into that row and must be eliminated diagonally.

The SIXAXIS technology in the PS3 controller plays a significant role in the game. Shaking the controller up and down shakes the bin the piyotama sit in, causing them to jumble around and change location a bit. Moreover, it causes hatching piyotama (which start to glow for a few seconds before hatching) to warm up and hatch sooner. That way, the player isn't stuck waiting for them to hatch while the game continues to progress.

A Piyotama Halloween Skin is available for free download from the Add-On Content section of the PlayStation Store. Mama Piyo will be dressed up as a witch and there is a spooky (and cute) feeling about this version!

It also includes a "Xmas" and "Valentine's" theme, with the Piyopiyos and Mama Piyo dressed appropriately for the season.
Tetris Dr. Mario 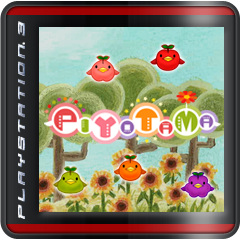