Poker Smash a fast and frenetic puzzle game similar to Tetris Attack, where the player must gain as many chips as possible as the level becomes steadily more hectic.
Xbox 360 Games Store

Poker Smash is a puzzle game that bears a certain resemblance to Tetris Attack. The game was developed by the independent studio Void Star and released on February 6, 2008 on Xbox Live Arcade. Void Star released two content packs each retailing for 100 Microsoft Points, one being an environment pack giving players two new action mode environments, and the other being a puzzle pack that featured 15 new puzzles.

The game features five rows of tiles, and each tile features one of the five high cards from a standard deck of playing cards--10, jack, queen, king, and ace. These tiles are pushed up from the bottom of the screen by a never-ending stream of new tiles. Using a horizontal, two-tile cursor, the player must swap adjacent tiles to form poker hands, such as a royal flush, straight, full house, four-of-a-kind, and three-of-a-kind. Once a hand is formed, the tiles disappear and the player is awarded chips. These chips are used to to unlock pictures, themes, and puzzle solutions.

Poker Smash offers several gameplay modes. In Action Mode, the tiles keep stacking and the game ends when the cards reach the very top of the play field. Timed Mode gives you a three-minute limit to earn as many chips as possible. Puzzle mode simple asks the player to remove all the cards on the field, and while there is no time limit, no new cards are added to the stack. Poker Smash includes local split-screen multiplayer, as well as  an online tournament mode where five players are given a set number of chips and the goal is to gain all the chips in play. 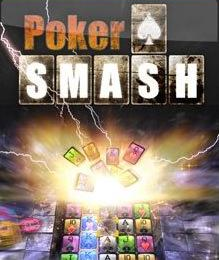