Tatsunoko vs. Capcom: Ultimate All Stars

A revamped edition of Tatsunoko vs. Capcom: Cross Generation of Heroes with new characters, modes, and features. Designed with an international release in mind, all but one character from the original roster remains, as well as several fan-favorite new challengers.

Unlike the original version, Ultimate All-Stars was released worldwide (as Capcom worked with Tatsunoko Production to resolve international licensing issues).

Like previous entries in the Capcom developed " VS" games, fighting is restricted to 2D and offers tag team-based gameplay. Unlike the previous VS games, TvC uses a four-button control layout rather than the six seen in standard Capcom fighters. Three of the buttons serve as light, medium, and heavy attacks; whether the attacks are punches or kicks is context-sensitive. The fourth button is used for tags and assists.

Despite using fewer buttons, the controls still allow for some of the more technical abilities from previous VS games such as team super moves, advanced blocks, and mega crashes. The standard array of modes seen in most fighting games are also present: single-player arcade mode against the computer A.I., local and online versus modes, and a training mode in addition to other features.

Tatsunoko vs. Capcom allows the player to do a special super jump in addition to the characters' standard double and triple jumps. Performing a super jump propels the character to a height exceeding that of the triple jump almost instantaneously. Super jumps are mainly for evading super attacks at close range and are executed by pressing the direction down before jumping.

There are two prim ary gauges on screen that the player must be aware of. The first is the health bar. Like other Capcom Versus games, as a character takes damage and health is depleted, the green portion of the bar representing the character's current health will fall, with a portion of the emptied bar remaining red. When a character that has taken damage is tagged out of the fight, he or she will gradually regenerate health up to the current maximum dictaed by the red portion of the health bar.

The second meter is the super gauge, which gradually fills as the player gives and receives damage. Up to five levels of super energy can be stocked in order to use the characters' most powerful attacks.

By pressing the assist button once the player's character that is currently sitting out will temporarily jump in and perform an assist before jumping back out. By pressing the assist button and back direction on the D-pad or stick simultaneously, the reserve character will jump in and swap places with the active fighter, who will leave the fight and slowly regain energy.

By pressing an attack button and forward when an opponent's attack is about to connect, a Push Block is performed. This technique block's the opponent's attack and also stuns them for a short period, giving the player the opportunity to counterattack.

A Baroque Cancel is a technique performed by hitting the tag and one of the attack buttons simultaneously. If done correctly, the red portion of the active character's health meter will be drained, giving the character a temporary power boost. The length and magnitude of the power boost depends on how much of the character's health gauge was red at the point the Baroque Cancel was invoked.

A Mega Crash can be performed by pressing all three attack buttons and the tag button simultaneously. This technique can be performed while in the middle of an opponent's combo, breaking the combo chain and sending the opposing fighter across the screen. Performing this technique requires two levels of the super meter and drains a portion of the fighter's health, making it a tactic that should only be used when absolutely necessary.

Super attacks are special attacks that require one to three units of the super attack meter. Supers are are performed by performing an input on the D-pad in conjunction with two attack buttons instead of one. Some supers can be performed while airborne as well as on the ground.

While using the Wii Remote by itself, the controls are paired down and simplified so that the more complex button commands and D-pad motions are not required to invoke most special attacks.

Tatsunoko vs. Capcom: Ultimate All Stars features a number of gameplay modes that are standards of the genre, including:

The game includes 26 playable characters (13 from Tatsunoko properties and 13 from Capcom properties) and 1 unplayable boss character (considered a Capcom character). Five of these characters are new additions, while one character from the original game (Hakushon Daimaou) was removed due to licensing issues.

Like the original game, two of the playable characters (G. Lightan and PTX-40A), as well as final boss Yami, are considered "giant" characters and can not be played with a tag-team partner.

The Shop and Gallery

While playing offline, the player can earn Zenny, a currency used in the in-game shop to unlock special features. Such features include galleries and art of the characters and stages, as well as extras such as new colors for the characters. One color is unlocked for each character that defeats the giant (PTX-40A/Gold Lightan) in arcade mode, and the other when each character is used to defeat Yami. Unlocked artwork and videos can be viewed in the game's gallery.

There's a minigame hidden in the game's credits. After clearing arcade mode, wait for the credits to start rolling and press A. The black screen will become a silhouette of a rolling hillside, and Doronjo, Boyacky and Tonzura will appear on a bike. The player can earn extra Zenny by jumping up to grab letters in the staff members' names as they roll by. Collecting the golden letters that occasionally appear in some names will spell out "THANK YOU FOR PLAYING" at the end of the credits, minus any letters missed.

Alternatively, if the player beats Arcade Mode using Roll, she becomes the playable character for that instance of the minigame. In this variant, the player controls Roll as she flies across the screen on her broom. The end credits music also changes to a unique theme for the duration.

Successfully collecting all of the golden letters to spell the phrase will unlock the extra game "Ultimate All-Shooters."

Although most of the minigames from Cross Generation of Heroes have been removed, one previous game, belonging to the PTX-40A, has been expanded into "Ultimate All-Shooters." This minigame, set in the Lost Planet universe, is a scrolling shooter where players face off against the Akrid. There are four playable characters; the PTX-40A, Ryu, Ken the Eagle, and Tekkaman Blade, each with their own unique gimmicks. This mode supports up to four players simultaneously.

Numerous other characters from properties not already represented by playable characters also appear in the game's endings. Examples include the Capcom characters Devilotte, who appears in Doronjo's ending, and Arthur, who appears in Kaijin no Soki's ending. Among the new characters, Joe the Condor's ending features appearances from Haunting Ground's Fiona, Hewie, and Debilitas. Yatterman-2's ending features cameos from "evil trios" that appeared in Tatsunoko's Time Bokan franchise.

The first information related to Ultimate All Stars and its U.S. release was revealed in the June 2009 issue of NIntendo Power, scans of which leaked onto the internet the previous May. In the article, the game's producer, Ryota Niitsuma, revealed that new features and characters not present in the Japan-exclusive Cross Generation of Heroes would be included in Ultimate All Stars, as well as an online mode. Some days later Capcom confirmed the news on their blog, stating that the game's existence was one of their two big mystery announcements for E3 2009. Soon after Capcom confirmed that the game would also be coming out in Europe.

A press release issued by Capcom on June 2, 2009 confirmed the aforementioned online play and revealed that five new characters would be included in the western release. Due to licensing reasons, one Tatsunoko character, Hakushon Daimaou, had to be removed from the roster.

In September of that year, it was announced that Ultimate All Stars would receive a Japanese release. Famitsu soon after revealed the first new character: Tekkaman Blade.

The Japanese website was updated soon after Tekkaman Blade's reveal, but curious visitors discovered that careless coding had revealed the remainder of the roster; Joe the Condor (Science Ninja Team Gatchaman), Yatterman 2 (Yatterman), Frank West (Dead Rising) and Zero ( Mega Man X and Mega Man Zero). Though Capcom refused to comment and fixed the website to remove the revealing code, the information indicated in the code turned out to be correct as all the 'hidden' characters are in the game's final roster.

The game was released in January 2010 in all regions. The initial launch took place on January 26, 2010 in North America, followed by Japan on January 28th and January 29th in Europe. The game's online mode supports world-wide matchmaking.

As was the case with Street Fighter IV, Capcom has licensed Mad Catz to produce TvC-branded arcade sticks to be released alongside the game. Additionally, the game may be played using either the Classic Controller, Wii Remote/Nunchuk combo, the Wii Remote itself held sideways, or the GameCube controller. The game is also fully compatible with existing arcade sticks such as the one manufactured by Hori. 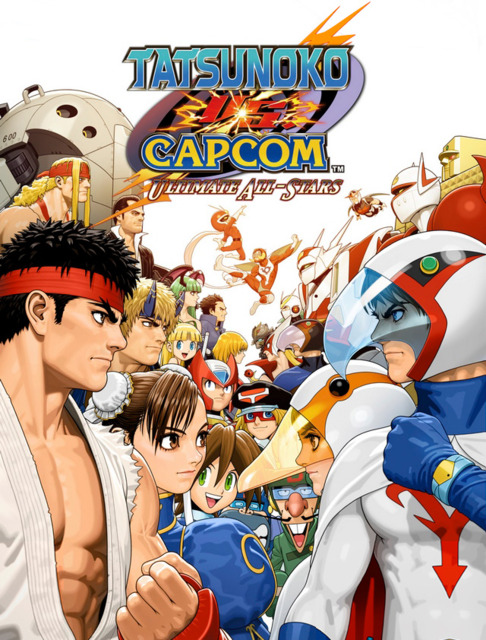