Settlers II is a real time strategy game released by Blue Byte Software in 1997. It is the second in a long line of Settler games but is considered by many as the best in the series as the following games moved away from its unique type of gameplay.

Compared to modern games, It moves at a relatively slow pace and its gameplay differs greatly from other Real time strategy games.

One of the main differences between settlers and other Real time strategy games is that units are not directly controlled by the player but instead  they automatically  complete tasks assigned,   such as building structures or gathering resources. These units or 'serfs' can only travel along  set roads between structures. There is a serf for each stretch of road and each road is denoted by a flag at each end. Resources are carried between these road networks using a kind of 'serf-chain' system, by which workers carry resources from one flag to another along their stretch of road. Only military Units may move freely across the map. Although these are also not directly controlled by the player but instead can be ordered to attack enemy military structures, a task in which they then carry out automatically.

The player Starts out with only a headquarters  and a small area of land on which to build on. This area of building land can be Increased through the construction of military structures such as barracks, guard houses, watchtowers and fortresses. ( Fortresses increasing the area the largest amount while barracks the smallest). Resources are gathered Through the construction of special buildings. Such as the Quarry or Fishery. Once constructed a specialized worker automatically gathers resources from the surrounding area. The main resources are food, rock, lumber and ores which can be used to building more buildings and units or used to create specialized resources such as beer and weaponry  to produce soldiers and Coins to increase the soldiers rank.

Soldiers are used to take over enemy structures and reduce their building area.  The player can send any amount of available soldiers to an enemy military structures where the soldiers must defeat all enemy soldiers housed in the building ( higher rank soldiers have a higher hit rate and health). If the player's units defeats all housed soldiers then the military structure is taken over by the player and all non-military structures are burned. An enemy faction is destroyed when the player can defeat all soldiers housed inside that enemies headquarters. Once defeated the headquarters disappears and all serfs are left to wonder around the map until they slowly die ( very dramatic). A player wins a game when all enemy factions have been destroyed. Settlers can be played in both a campaign mode or a through a standalone scenario created by the player. 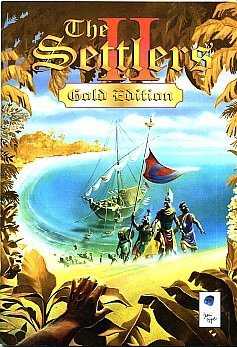